Stones into Schools Promoting Peace with Books, Not Bombs, in Afghanistan and Pakistan

By Greg Mortenson
An extraordinary account of promoting peace in Afghanistan and Pakistan through education and community service.

Saadi of Shiraz has stated: "Every leaf of the tree becomes the page of the Book / Once the heart is opened and it has learnt to read." These words are on the first page of Greg Mortenson's follow-up to his bestselling 2006 Three Cups of Tea where he told the incredible story of his crusade to establish schools for girls in Pakistan and Afghanistan. His favorite mantra is from an African proverb which says, "If you teach a boy, you educate an individual; but if you teach a girl, you educate a community."

Mortenson begins this book with the story of how he came to build a school in Wakhan, Afghanistan, home of the Kirghiz horsemen, "a place so distant and so far beyond the margins of the known world that it seems to delineate not only the outer limits of geography but the edge of civilization itself." In completing this formidable project, he is assisted by his right-hand man Sarfraz Khan, locals, and even a former Taliban member. Mortenson learns that in Afghanistan, everything is revealed in clothes, body language, speech patterns, and manners.

The forward momentum of Mortenson's nonprofit Central Asia Institute (CAI) takes a turn when a massive earthquake hits the Azad Kashmir region of Pakistan in October of 2005. The death toll is 86,000 people, including 18,000 children who were in school when the tremors began. Donors give Mortenson money for relief projects to set up water delivery systems, temporary tent schools, and three earthquake-proof schools.

One of the many hopeful things about the work of this idealist is the unexpected impact it has on some military leaders in America as well as the soldiers:

"Of the hundreds of soldiers I have spoken with during the past six years who have been deployed in Afghanistan, almost every one of them firmly believes that the best way to augment our security is by truly being of service to the Afghan people — and moreover, that the capacity to render this service meaningfully and well is predicated upon listening, understanding, and building relationships. In this respect, the goal of enhancing our own security is best achieved by enhancing theirs. And the most critical building block to accomplishing both is education." As one soldier, Chris Kolenda, writes to the CAI: "I am convinced that the long-term solution to terrorism in general and Afghanistan specifically is education."

Mortenson's spirits are lifted by these statements but even more by the thirst of children for literacy. Books not bombs are what are needed in Afghanistan and Pakistan. Empowering communities to educate young girls is a better way to combat the influences of the Taliban and Al Qaeda than blowing up their hiding places. (In a recent interview on Bill Moyers Journal, Mortenson noted that a son is expected to get permission from his mother before he engages in a political act, raising the important question of whether educated mothers would allow their sons to be suicide bombers.)

The world is a better place because of Greg Mortenson, and we pray that his path of promoting peace through education will continue to work wonders in the lives of children and their communities. 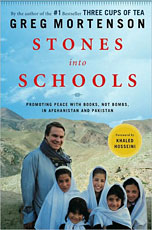