With Roots in Heaven

By Tirzah Firestone
A memoir by a rabbi who is a believer in the mystical underpinnings of all religions.

This is a stirring and deeply edifying memoir of a wandering Jew who rejected the dogmatism of her Orthodox Jewish family only to eventually become the founding rabbi of the Jewish Renewal Congregation Community of Boulder, Colorado. Tirzah Firestone is a pioneer of spiritual integration, a project that will turn out to be one of the most important adventures of the twenty-first century.

For years, the author nurtured her "divine portion" with explorations of Sikh, Hindu, and Sufi mysticism. She attended the Rocky Mountain Healing Arts Institute and became a psychotherapist before seeking ordination. Her husband Frederick, a Protestant minister, was instrumental in bringing her back to the rich resources of Judaism. When her teacher and mentor, Rabbi Zalman Schachter-Shalomi came to their home, he found ample evidence of their hyphenated identities: "Greek Orthodox and Celtic crosses hanging opposite the stained-glass aleph, mezuzahs on the door, and texts on Jesus peppering the bookshelves."

Firestone recounts the challenges she faced as an intermarried rabbi and as a believer in the mystical underpinnings of all religions. Her spiritual autobiography reveals again and again the pain brought on by those who claim to have the "truth." For her, separation and exclusivity are the hallmarks of sin. She closes this inspiring work with her vision of the challenges faced by Jewish renewal communities — to bring the wisdom of the ancestors to bear upon the post-modernism of contemporary society. 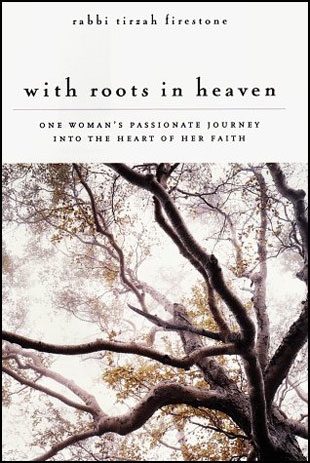