Intimacy with God An Introduction to Centering Prayer

By Thomas Keating
A precise and enlightening overview of Centering Prayer.

Thomas Keating, a founder of the Centering Prayer movement, is an author, teacher, and monk who has worked for many years to foster understanding among the world's religions. As a member of the Cistercian Order in the Benedictine tradition, he has served at monasteries in Colorado and Massachusetts, and currently he directs retreats in the practice of Centering Prayer, a cornerstone of contemporary Christian contemplative practice.

In all the advanced spiritual traditions of the world's religions, the awareness of non-duality alludes to the death of the false self and the diminishment of a sense of separateness, explains Keating in the foreword. This awareness is combined with a yearning for unity with Ultimate Reality. In the mid-1970s, as America's youth became attracted to Eastern meditation, unaware of the resources for a rich devotional life in their own Christian tradition, Keating, along with Father William Meninger and Father Basil Pennington, came up with Centering Prayer as a Christian response. Their commitment to Centering Prayer later led to the establishment of Contemplative Outreach, which runs workshops and retreats. Keating and his colleagues identified themselves as "a network of faith communities committed to the process and transmission of Christian transformation."

According to Keating, Centering Prayer is a preparation for contemplation, an exercise of intention, and "a habit of surrender to God's increasing presence and action." It is a prayer where we are developing "the capacity to wait upon God with loving attentiveness." Keating describes the the Four Moments of Centering Prayer: Sacred Word (beginning of the prayer), Rest (sense of God's presence, peace, and interior silence), Unloading (relaxing of the defense mechanisms and the emergence of the undigested emotional material of early life in the form of intrusive thoughts and feelings), and Evacuation (release of primitive emotions and thoughts and return to sacred word). The book offers thoughtful material on the purpose of people who suddenly show up in our lives, the subtle movements of grace, the divine energy that flows into us and through us, the dark night of the soul, the important role of silence in the spiritual life, and supportive practices (Lectio Divina, Praying the Rosary, etc.). Intimacy with God is a concise and enlightening overview of Centering Prayer. 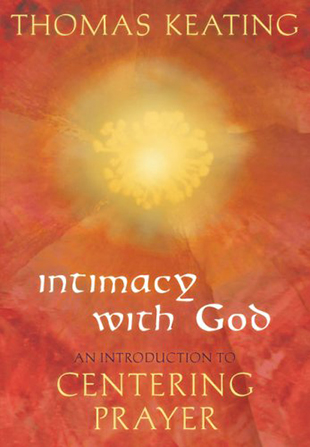