The Banyan Deer A Parable of Courage and Compassion

By Rafe Martin
An inspiring and touching parable about courage, compassion, nonviolence and a change of heart.

The bestselling Tibetan Buddhist nun Pema Chödrön has written: "True compassion does not come from wanting to help out those less fortunate than ourselves but from realizing our kinship with all beings." This deep truth is perfectly illustrated in Rafe Martin's compelling adaptation of one of the stories in Pali Jataka, a collection of 500 stories about Buddha's earlier lifetimes. Compassion has been described as a feeling deep inside ourselves — a "quivering of the heart" — that is spurred on by our empathy for the suffering of others. It is a central virtue in many of the world's religions and the Dalai Lama has called it a spiritual practice that can bring all the wisdom traditions together to repair the world.

The king loves hunting in the forest with a large band of other men gathered from the villages. When the people lock away a group of deer in a stockade, the king is immensely saddened by the idea that he will no longer be able to thrill with the excitement of the chase and the hunt. Each day the king's men shoot one deer for the royal kitchen. But in the process, other deer die trying to dodge the arrows. The deer agree that only one deer will be killed each day, chosen by themselves in a lottery, and the rest will be spared injury from trying to escape. When a doe who is about to give birth is selected, the Banyan deer steps forward and volunteers to die in her place. The king is deeply moved and sees that this creature is a great spiritual teacher, and he sets him free along with his herd. But the Banyon deer continues the dialogue and states that he will have no peace until the other herd and all forest beasts are free from being hunted. He says:

"Too long have I lived with danger to let it fall so heavily on others now. All the other four-footed animals of the forest will suffer terribly if I leave. They will be hunted without limit or mercy. How can I abandon them and be at peace myself, knowing that my freedom was bought at such a price?"

Here is an inspiring parable of peace and nonviolence for both adults and children. It champions the courage and compassion of the Banyan deer who is willing to lay down his own life for others. It also heralds hope that human beings can change their minds and be moved by their hearts to abandon killing and violent ways. 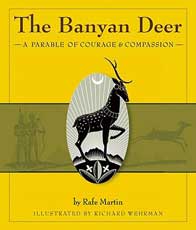