By Toni Bernhard
An eloquent and compelling account of chronic illness and the spiritual practices which can be used to deal with it.

Toni Bernhard taught at Davis School of Law at the University of California from 1982 until 2004 when she retired due to a mysterious illness which struck her while she was in Paris, France. The symptoms were similar to those accompanying a severe flu: a dazed sick feeling, a low-grade headache, extreme fatigue, a pounding heart, and an inability to concentrate. This chronic debilitating disease has lasted for nine years and has been diagnosed as a variety of possible diseases from Chronic Fatigue Syndrome to Viral Induced Central Nervous System Dysfunction. In this down-to-earth book filled with invaluable wisdom and spiritual practices, Bernhard has found a way to make good stewardship of her disease by helping others in the same boat, along with their caregivers.

In the late 1990s, the author heard Joseph Goldstein allude to the universal law of impermanence as "Anything can happen at any time." For her that had come to include getting sick and not getting better. Then Bernhard came across "broken glass practice" by Thai Buddhist monk Ajahn Chah, referring to the uncertainty and unpredictability of life: A glass will break sooner or later; that is its nature. So be prepared to enjoy it in the present moment but not cling to it as something that will last forever.

Being a shut-in with little mobility makes it difficult for chronically ill individuals not to envy others who are able to attend weddings, go on vacations, or eat out regularly. Bernhard has dulled the edges of her envy through the practice of mudita or being able to rejoice in the happiness of others. She then shares her metta practice and concludes that nothing is more soothing to a sick body, a troubled mind, or a hardened heart. Bernhard learns to be compassionate toward herself, throwing away self-recriminations for not regaining her health. In the process, she learns the healing powers of patient endurance. And when this passes and the dark cloud of fear arises, she rests in the thought: "My heart is big enough to hold this fear." She practices equanimity in the face of the insensitive and hurtful comments people make about illness, in response to doctors and treatments, and when she's feeling overwhelmed by losses. She recommends a phrase suggested by Ajahn Chah about letting go: "I'm suffering because I don't want this to be happening but, like it or not, it is happening, so can I let go just a little — just a baby step?"

Other practices Bernhard suggests for the chronically ill and their caregivers are Byron Katie's inquiry method of four questions and a turnaround; Thich Nhat Hanh's healing the mind by living in the present moment; Seung Sahn's "don't know mind" which acknowledges the mysteries inherent in sickness, pain, suffering, and healing; wise speech; and trying to find community in the midst of isolation. How to Be Sick is an eloquent and compelling account of Toni Bernhard's handling of a chronic illness. The depth and variety of spiritual practices offered in the book make it a major achievement. 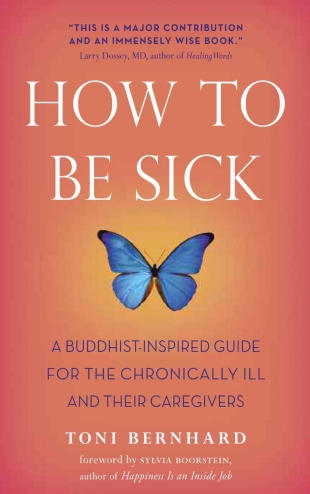