The Greatest Prayer Rediscovering the Revolutionary Message of the Lord's Prayer

By John Dominic Crossan
Explores the Lord's Prayer in Matthew as a manifesto and hymn of hope.

John Dominic Crossan, professor emeritus at De Paul University, is widely regarded as the foremost historical Jesus scholar of our time. Over the last 40 years he has written 40 books on the historical Jesus, early Christianity, and the historical Paul. In this scholarly work, Crossan explores the Lord's Prayer in Matthew as "both a revolutionary manifesto and a hymn of hope." Its content reveals the radical vision of justice from Israel's biblical tradition and its form is a style that mirrors Israel's biblical poetry.

With creative élan, Crossan points out how this prayer taught by Jesus is unusual:

Crossan then goes through the Lord's Prayer line by line, offering his historical perspective and his theological interpretations. Here are five points he makes about this devotional classic: 1. It is helpful to use the term "householder" instead of "father." 2. Made in the image of God, we are called to collaborate and to seek to bring about justice and equality in this world. 3. Jesus is Heir of God. 4 Christians are challenged to co-operate with Christ as joint heirs with him. 5. These themes mark the sum and substance of the Lord's Prayer. 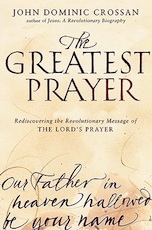 Park one of a two-part interview with John Dominic Crossan

Park two of a two-part interview with John Dominic Crossan