Notes from the Edge Times

By Daniel Pinchbeck
Hard-hitting essays criticizing contemporary culture and offering new ways of transforming the nation and its roll toward self-destruction.

Daniel Pinchbeck is the bestselling author of 2012: The Return of Quetzalcoat and coeditor of Toward 2012: Perspectives on the Next Age. This collection of essays, arranged in chronological order, consists of pieces written over the past three and a half years. In the introduction, Pinchbeck calls this book an exploration of the perils and potentials of our time:

"Our current culture extols irresponsibility, greed, and waste. If humanity chooses to awaken to its potential and confront the crisis we have unleashed, the culture that supercedes this one will express different values and run on a radically re-vamped operating system."

In an essay titled "Mission Possible," Pinchbeck contends that America operates the dream-machine of the planet through television shows and movies. What we need is to shift the message of attaining a better life through affluence to one of working together to create a more just society. Rather than brainwashing people with violence and nonstop action films, we could present to the world inspiring portraits of community building, nonviolence, and eroticism as a tool for personal growth. If we don't change the worn-out media paradigm soon, we may reap more dark and dangerous times.

Other dangers pointed out by Pinchbeck are our permanent war culture which has been casually accepted by most Americans; the continuing governmental secrecy about the study of the mind and behavioral control techniques; and the challenge of doing something definitive about the monetary system, the financial crisis, and unemployment.

The author salutes the following positive developments in culture and religion: a new paradigm of psychic energy and intention; a new culture of initiation for young boys and others; a wiser and more integrated phase of the sexual revolution; advocacy of the benefits of psychedelics; developing nonviolence as a spiritual practice; and shifting from a remote-control oligarchy to a true democracy.

Pinchbeck also includes essays on Evolver (of which he is cofounder; see www.evolver.net) and Reality Sandwich (where he is editorial director) — companies he qualifies as "interdependent media" aimed at supporting a paradigm change, elevating human consciousness, and offering practical and visionary alternatives to a culture entrenched in money-making, escapism, and the pursuit of affluence. 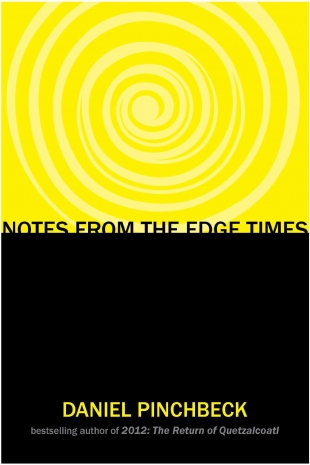 Daniel Pinchbeck on our current times