By Sherry Turkle
An abundance of insights and creative observations on our machine mediated lives and what this all means for intimacy, solitude, and being connected.

Sherry Turkle is Abby Rockefeller Mauze Professor of the Social Studies of Science and Technology in the Program in Science, Technology, and Society at MIT and the founder and current director of the MIT Initiative on Technology and Self. She received a joint doctorate in sociology and personality psychology from Harvard University and is a licensed clinical psychologist. Alone Together completes a trilogy of books on the various ways in which human beings interact with technology; the first two are The Second Self and Life on the Screen.

The technological tools we are using are changing our perceptions of intimacy and solitude. Turkle has studied this broad and complex subject over the past 15 years and come up with startling conclusions about youngsters and senior citizens being taken care of by robots and kids who are enmeshed with digital technology from personal computers to iPhones, Blackberries, Facebook, Twitter, MySpace, and Skype. Turkle has done extensive interviews with both adults and teenagers who live in a world of machine-mediated relationships on networked devices.

One of the most interesting things the author discovered is that despite all the talk about being connected with others through our chain of messages and many friends, we aren't:

"We're using inanimate objects to convince ourselves that even when we're alone, we feel together. And then when we're with each other, we put ourselves in situations where we feel alone — constantly on our mobile devices. It's what I call a perfect storm of confusion about what's important in our human connections."

Turkle recalls a thirteen year old who told her she hates the phone and never listens to voice-mail. Texting is the main way she communicates with others. A college student agrees with her criticizing the phone from taking too much precious time with people who go on and on talking. It seems that this generation is afraid of face-to face contact and the messy world of intimacy in relationships. Another shocking result: studies show that this generation of teens is less empathetic than those who have preceded them. There is a certain self-absorption that comes with the yearning to be continuously validated. This plays itself out in being tweeted and retweeted, with virtual friends that number into the thousands, and with the widespread feeling of wanting to "dial down" human contact.

There is such a wealth of information in Alone Together that it is impossible to cover all the insights and epiphanies in it that spark the mind and stir the soul. Some of the other material in the book includes examinations of privacy on the Internet, role-playing, the popularity of games, the lack of etiquette by cell phone users on the street and everywhere else, the scourge of multitasking in offices, the anxiety of being "on" all the time, the problem of not being present with others in the face-to-face world, and the dangers of any technology that "proposes itself as the architect of our intimacies." 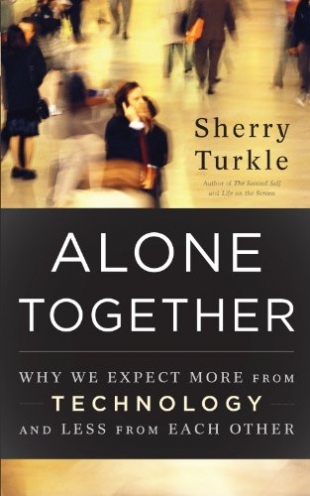