All That We Share A Field Guide to the Commons

By Jay Walljasper
A bold and imaginative call for a major paradigm shift from the market system to the commons where sharing and caring are the operative ideals.

All the world's religions and wisdom traditions hallow the process of human caring and sharing as an expression of community. In these desperate times when there are so many homeless, so many who are unemployed, so many who are anxious about their financial future; it is evident that our market-driven society is failing millions of people. The signs indicate that things are not going to get much better, except, perhaps, for the rich.

It's time we moved from a "Me" to a "We" society. Jay Walljasper's new book, which is subtitled "Field Guide to the Commons," calls for just such a paradigm shift from competition to collaboration. In the process, he and the other writers in the paperback offer solutions to some of the most worrisome social, economic, and political problems of our times.

Jay Walljasper is the author of The Great Neighborhood Book and editor of On the Commons.org, a movement strategy center connecting organizations and communities with new ideas and tools. Walljasper defines the commons as:

"A wealth of valuable assets that belong to everyone. These range from clean air to wildlife preserves; from the judicial system to the Internet. Some are bestowed to us by nature; others are the product of cooperative human creativity. Certain elements of the commons are entirely new — think of Wikipedia. Others are centuries old — like colorful words and phrases from all the world's languages."

For the past 200 years, society has been dominated by the market-based system with its competitive ethos, its belief in the power of corporations to transform the world, its emphasis on private property, its honoring of the rich and the successful, its protection of the status quo, its indifference to ecological disasters, its income inequality, its worship of progress, and its domination of politics by lobbyists. Walljasper and the writers on these pages (including Robert Reich, Ralph Nader, Bill McKibben, Lewis Hyde, David Bollier, Robert Kennedy Jr., Maude Barlow, and others) see a commons-based society as an alternative to the market-based system. It would put the accent on social justice, democratic participation, environmental action, and collaborative efforts of citizens working together. Peter Barnes puts it well:

"If our old Manifest Destiny was to carve up the commons, our new task is to rebuild it. We must do this to protect the planet, enhance our quality of life, reduce inequality, and leave a better world for our children."

Given the poor state of the American economy, the degradation of the environment, the confusion of the Internet, the disrepair of democracy, the decline of communities, the time is ripe for the newly emerging commons movement. Walljasper give us hope that it is taking hold as urban gardeners, hometown champions, Greens, whistle-blowers, health care advocates, defenders of libraries, fighters for water justice, and local artists are all involved in the creation of new forms of sharing. As Bill McKibben states: "The commons is a crucial part of the human story that must be recovered if we are to deal with the problems now crowding in on us."

Here are some of our favorite fresh insights presented in this bold and imaginative book:

• Four Characteristics of a Commons by Jonathan Rowe

• Eight Principles for Managing a Commons by Elinor Ostrom

• Caring for Those Who Care (the unpaid labor provided within families and communities as well as the underpaid work of child care, elder care, nursing, and teaching.)

• The Best Movies, Novels, Music, and Art That Evoke a Spirit of Sharing

Julie Ristau writes that we all savor the art of connecting with others to find security, comfort, and joy. She continues:

"Commoning is a 'third way' — not locked into the profit-driven mechanics of the market nor dependent on distant government agencies — that enables everyday citizens to actively make decisions and take actions that shape the future of their communities."

The shift from "Me" to "We" is emphasized as the most humane and human path to follow according to all the world's religions and wisdom traditions. That is why spiritual people of all stripes must give their time, action, and support to the important and growing commons movement. It offers practical solutions to our most trenchant social, political, and economic problems. 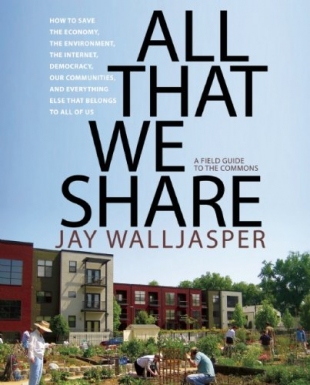