Together We Are One Honoring Our Diversity, Celebrating Our Connection

By Thich Nhat Hanh
Teachings by the Zen Master to practitioners of color about mindfulness, compassion, community, and having no enemies.

Thich Nhat Hanh is a Vietnamese Zen master who has written many books and leads retreats around the world on mindful living. He is featured on Spirituality & Practice as a Living Spiritual Teacher. This book of commentaries, stories, poems. and essays demonstrates how the dharma is being practiced at his retreat centers. These teachings are addressed to people of color among his practitioners. The aim is to cultivate compassion, to rid ourselves of separation impulses, and to be open and hospitable to diversity.

In the first chapter, Thich Nhat Hanh talks about his former stateless status while in exile from Vietnam. It was similar to living in limbo. But for many years, he has stated:

We can find our true home through breath and mindfulness exercises like those described in this paperback. Thich Nhat Hanh is concerned about Western folk who don't know how to rest anymore. When the body becomes tense regularly, chronic pain can appear. When an animal is hurt, it immediately lies down to rest and stays very still. They don't eat or move around. After this siesta, they are revitalized and ready to go back into the fray. Thich Nhat Hanh recommends that when stressed to the max, we practice sitting, breathing, or walking as a way to bring calm to our bodies and our minds.

Civilization, he writes, means accepting everyone. He sees the complex of superiority and inferiority as two forms of sickness based on the illusion of self. By cultivating compassion for ourselves, we can begin to travel the path of peace which leads eventually to having no enemies. Imagine your world as villain free with no need to wage a war of "us" versus "them." Imagine all the excess energy you'd have if you let go of grudges, temper tantrums, and rage. And finally, imagine what it would be like to live each day without fear and paranoia about our safety. A Buddhist practice is to chase away the imagined boogie man with: "I feel safe, wherever I am."

For Thich Nhat Hanh, the sangha is the masterpiece of the Buddha, a community of caring and sharing, an oasis in the world for healing and transformation. Reading the passages by his practitioners at Plum Village, we can see just what he means. 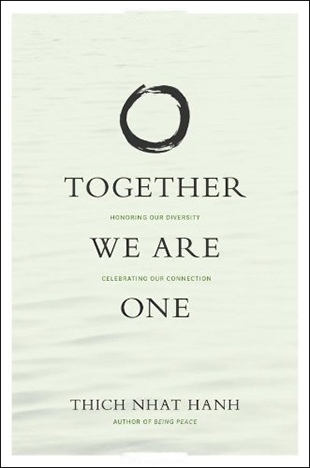