By Susan Jacoby
A hard-hitting and illuminating examination of the daunting challenges facing the baby boom generation as they age.

Susan Jacoby is the author of nine books and can be reached at www.susanjacoby.com. She recently turned 65 in a vanguard of individuals entering this stage of life just before the gigantic baby boom generation. In this well-written book, Jacoby takes a hard look at what she sees as the realities facing millions of old people in a country where youth is idolized. She writes: "I hope this book about the genuine battles of growing old will provide support for all who draw strength and courage from reality, however daunting that reality may be."

In the opening pages, Jacoby writes about her grandmother who almost made it to 100 years of age and who once said: "The worst thing about having lived too long is you know you are of absolutely no use to anyone." This honest perspective stands in absolute contrast to a World Science Festival held in 2008 in New York City where a panel suggested that 90 may soon become the new 50. Jacoby offers a critique of twenty-first century hucksters of longevity who are peddling "age defying" products and clapping their hands every time the media portrays another 90-year-old skydiver or marathon runner. She goes on to offer historical evidence of America's obsession with staying "forever young."

By 2030, the U. S. Census Bureau predicts, those over 65 will make up 20 % of the population — compared with about 13% today. Most important, the fastest-growing segment of the population will be the over-85 group. Jacoby postulates that many of these members of the "ol' old" cohort can expect a period of extended frailty and disability before they pass on. Anyone living this long has about a 50-59 percent chance of ending up in a nursing home or developing dementia. Jacoby's paternal grandmother died of Alzheimer's disease, and she spends quite a bit of time and space on this invidious disease that cannot be held back by exercising and eating right. Right now, there is no effective treatment or cure. Today, about 5.2 million Americans suffer from the disease, but 2010 saw the beginning of the onset of 500,000 new cases annually. The number of new cases per year is expected to rise to a million by 2050.

Old age is primarily a woman's issue, writes Jacoby, who points out that in the United States, two-thirds of those over 85 and 85 percent of centenarians are women. Jacoby delves into the challenges old women face in terms of loneliness, poverty, sexual invisibility, and a diminished sense of physical allure. The author has some interesting things to say about the rampant fears of senior citizens in the face of a floundering Social Security system; the financial plight of many middle-class and working-class people; and the widespread number of old people with no personal savings left.

We were totally unprepared for the following sentence: "There is about as much proof of the wisdom of old age as there is of the medical efficacy of holy water from Lourdes." Jacoby moves on to a chapter on the ambivalence of American attitudes toward death and dying, covering such topics as living wills, end-of-life care, and assisted suicide.

Never Say Die offers a hard-hitting and insightful guide to the daunting challenges baby boomers will face as they age. 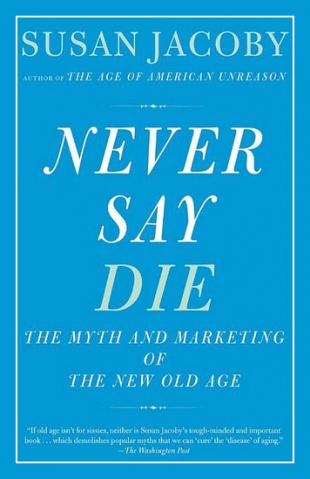