Taoist Shaman Practices from the Wheel of Life

By Kris Deva North, Mantak Chia
Explanations and practices from the Wheel of Life which plays an important role in Taoism.

Mantak Chia founded the Universal Healing Tao System in 1979 and since then has taught and certified tens of thousands of students and instructors from all over the world. Kris Deva North has been involved in Taoist practice since 1987 and is cofounder of the London Tao Centre. Together they explain the shamanic principles which lie behind the Taoist Medicine Wheel which is "the foundation of most Chinese art, of the traditional Chinese medicines we know today as acupuncture and herbalism, of Chinese astrology and divination, of Tai Chi Chuan, 'the supreme ultimate' combining meditation and martial art, and of the esoteric sexual practices taught to the emperors by their female advisers to form the basis of Taoist alchemy: the quest for immortality." Many see the medicine wheel as the circle of life which connects inner and outer, higher and lower.

Chia and North begin with the five elements (wood, fire, earth, metal, water) which are seen as "energy transformations that flow from the interactions of yin and yang." They nourish one another in a cycle of support and regulate one another. In Chinese medicine, the fourteen meridians have a two-hour period where maximum energy pulses through them. The elements interact with these at certain times in the day and each element has a direction, a sense and sense organ, a color, a guardian animal, and both positive and negative emotions.

Chia and North spend plenty of time explaining the Eight Forces of Nature which are reflected in Eight Immortals, each associated with a particular geographical direction, season, color, planet, animal, organ, and so forth. In their continuing explanations of the Taoist Medicine Wheel they discuss the Twelve Animals, the I Ching Hexagrams and Daily Life, Shamanic Practice, Spirit Guides, Creating Power Fields, and the Wheels of Healing and of Love. 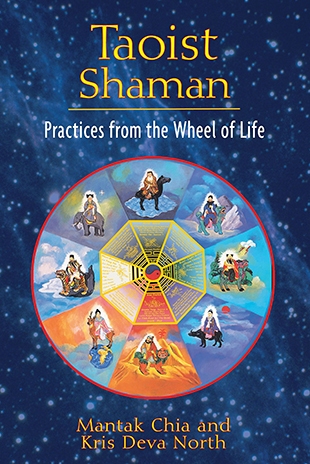