The Battle for God

By Karen Armstrong
An examination of the militant and vociferous voices of fundamentalists in Judaism, Christianity, and Islam from a period covering 1492 - 1999.

"Fundamentalism is now part of the modern world. It represents widespread disappointment, alienation, anxiety, and rage that no government can safely ignore," writes Karen Armstrong, one of the foremost commentators on religious affairs in both Britain and the United States. In this ambitious cultural, historical, and religious survey, the author of A History of God examines the militant and vociferous voices of fundamentalists in Judaism, Christianity, and Islam from a period covering 1492 - 1999.

She begins in the fifteenth century when due to the rise of modernism members of all three faiths were challenged by a polarizing, invasive, and widespread process of change. Then Armstrong examines the genesis of fundamentalism among Haredi Jews in Israel, biblically literalist American Protestants, and confrontational Iranian Shiites who saw Westernization as demonic. Whether writing about Dwight Moody, Rabbi Zvi Yehuda Kook, or Hasan al-Banna, the author touches upon the paranoia behind their stringent beliefs and counter-cultural ideals.

Although Jewish, Christian, and Muslim fundamentalists are great believers in tradition and exclusivist systems of truth, they have been masters of using the media and other modern technologies to advance their causes. Armstrong is sharply critical of their negativism: "All have neglected the more tolerant, inclusive, and compassionate teachings and have cultivated theologies of rage, resentment, and revenge."

How does the author think nonfundamentalists should deal with these growing movements? "It is important to recognize," she writes, "that these theologies and ideologies are rooted in fear. The desire to define doctrines, erect barriers, establish borders, and segregate the faithful in a sacred enclave where the law is stringently observed springs from that terror of extinction which has made all fundamentalists, at one time or another, believe that the secularists were about to wipe them out." Instead of fighting hate with hate, we must be "more faithful to the benevolence, tolerance, and respect for humanity which characterizes modern culture at its best." One approach, then, would be responding with empathy and compassion for the fundamentalists' fears.

Another I might suggest would be to follow the advice of the Baal Shem Tov. Several Hasidim came to him and said, "Our opponents, the sages of Brody, persecute us continuously and accuse us, heaven forbid, of disobedience to the Law and irreverence toward the tradition of our forefathers. We can endure it no longer, and we must answer them."

"Our adversaries," replied the Baal Shem Tov, "do this certainly out of pious zeal. They believe that they are performing a good deed, and they take joy in oppressing us. Why should we seek to deprive them of their joy?" 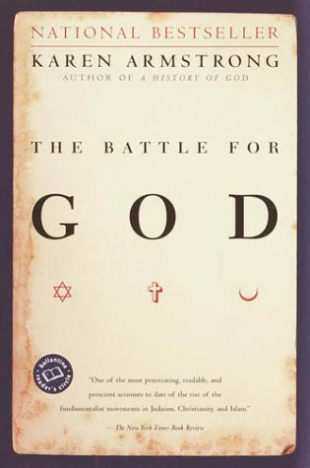