A Spiritual Guide for the Unemployed

By Timothy Mullner
An accessible and up-tempo collection of prayers, meditations, and reflections on surviving the fears and uncertainties of unemployment.

Timothy Mullner holds a doctor of ministry degree from the Graduate Theological Foundation in Indiana. In 2009 he lost his six figure, VP job, joining the ranks of the unemployed. During this unsettling period of doubt and uncertainty, he wrote this series of reflective prayers and meditations in the form of poems on his experiences and feelings. As theologian Ronald Rohlheiser writes in the foreword, being out of work is a devastating blow to one's self-esteem. But it can also serve as a period of deep soul-searching about one's true identity and purpose for being on earth. He commends Mullner for offering "valuable prescriptions to help turn the pain of humiliation into renewed personal depth and peace of soul."

Mullner recalls receiving the notice "of termination and release" and images of five years of his life flash through his mind. Although his world has come crashing down, Mullner chooses to live in joy and hope in the midst of pain, hurt, and loss. He sees it as a new beginning, led by the Spirit to follow his passion. He also begins the inner work of letting go of the past and not living in resentment or regret.

Mullner feels empathy with 15 million other American men and women, who like him, are scouring job postings and praying for open doors. He knows that it is important for him not to view the loss of this job as the end of the world. But it is not easy to do so. Instead Mullner prays to surrender to God and to do the best he can to find a fulfilling and meaningful job.

Meanwhile, he sells his house and moves in with his cousins. Daily walks provide him with an oasis within his circle of uneasiness and fear about the future. He notes:

After months of praying, waiting, and listening, Muller finds a new job. He ends this accessible and up-tempo paperback with "A Top Ten List for Finding Your Way Through Unemployment." 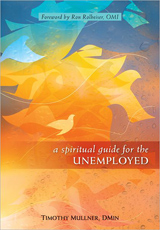