By Edwina Gateley, Sandra Mattucci
Poems in praise of spiritual women who have made a difference in the world.

In a time when millions of women and girls are treated like second-class citizens in their religions, they yearn for access to the inspiring lives of women with courage, faith, and the hope of making the world a better place to live. This paperback grew out of a retreat given by Edwina Gatley (Christ in the Margins) on women who have made a difference on the planet. Along with spiritual director Sandra Mattucci, she has profiled 22 outstanding women mystics, politicians, poets, religious figures, writers, environmentalists, martyrs, and Biblical characters. The result is an inspiring tribute to these heroines beginning with Gateley's mother and ending with Wangari Muta Maathai, the first black woman and the first environmentalist to win the Nobel Peace Prize.

Among our favorites in this collection are:

American poet Emily Dickinson:
"May we, too,
close the door
to listen in the silence of or souls."

Environmentalist Rachel Carson:
"Every creature that breathed
held kinship for you."

Catholic sister and martyr Dorothy Stang:
"Give us courage
to stand upright,
calling for justice"

The first American Tibetan Buddhist nun Pema Chodron:
"May we . . .
follow your path
into the deeper, truer life
that awaits all of us." 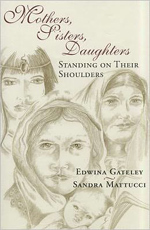