By Cary Fagan
A magical children's book about the delight that comes with the creation of stories.

Here is a magical children's book that will stir the imagination of young readers anywhere in the world. Leo sees Mr. Zinger, an old man in a black suit and hat, walking around the courtyard over and over again. The little boy thinks the old man is very weird.

Then one day the wind blows off Mr. Zinger's hat and they both try to retrieve it. After they do, they sit down on a bench together. Mr. Zinger says that a story is trying to get out of his hat.

He begins a tale about a man, and then Leo joins in by changing the lead character to a boy. They have a ball creating the story with one detail after another. Leo wants to tell more stories and then meets a little girl who loves them as well.

Cary Fagan is an award-winning author of children's books. This delightful celebration of the imagination is aimed at children four and up. Creativity is a birthright that must be nurtured as it is in Mr. Zinger's Hat. Notice also that working on a story with the old man takes away the boy's negative feelings about him as being weird. 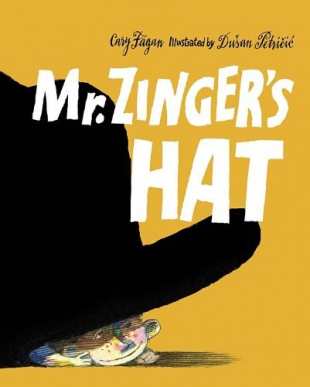