By Barbara Joosse
A charming children's picture book about a lonely little girl and an isolated dragon who follow their deep yearning for friendship.

Barbara Joosse, the author of this children's picture book and many others, has said: "When I was a little girl, I wished for two things: a best friend and something so ferocious that it would scare away the monsters underneath my bed." In Lovabye Dragon, she has combined the two desires in a lyrical and lovely story that touches the heart.

An "all-alone girl" in her little castle and a lonely dragon in a mountain cave both yearn for a friend. Wishing for a change in her life, she cries so many tears that they form a stream and wend their way to the dragon's cave. He then follows "the trickle of tears" to the castle room, and they rejoice in each other's company by singing, marching, and slipping happily into the dark night. Can they keep their relationship alive when she's so little and he's so large?

Barbara Joosse believes in the yearning that brings them together and the affection that develops between them. We number ourselves as believers in impossible friendships and wish these two characters well. Lovabye Dragon is illustrated by Randy Cecil and designed for children 3 years and up. 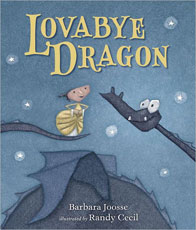