Spirituality What It Is and Why It Matters

By Roger S. Gottlieb
A useful exploration of spirituality as a movement that is happening inside and around us.

"From Christian mystics to thirteenth-century Islamic Sufis to the Dalai Lama in today's bookstores, spiritual teachers share lessons based in their own experience and believe that what they are saying is of immediate practical importance. Although spiritual insights may be many things, they are never abstract, academic, theoretical, or impersonal. Ultimately, they are about the meaning and value of each of our lives. To represent them in any other way would be to misrepresent them," writes Roger S. Gottlieb, a professor of Philosophy at Western Polytechnic Institute.

Spirituality is movement, and it is happening inside us and all around us. However, we must open our eyes and deal with both the wonders and the abominations, including separation, suffering, attachments, and more. We agree with Gottlieb when he affirms a piece of wisdom which traveled the world: "Do your best and leave the rest to God." We have not done well in the driver's seat, thanks to our ego and our propensity for putting ourselves first.

Gottlieb praises what he calls the two cardinal virtues of mindfulness and gratitude. But even when we are on the spiritual path, we can be tripped up by what Chogyam Trungpa calls "spiritual materialism" when spiritual teachings and practices become our possessions and accomplishments. For those seeking a spiritual path there is something for everyone in the world's religions or in the improvised movements toward peace, compassion, and justice.

In a chapter titled "Spirituality in Religious Tradition," Gottlieb does a fine job pointing out the inner riches of Sufism, a mystical path of devotion, yearning, beauty, and compassion. He also bows to the humility of some Christian believers and the joy of Hasidism. Next, he moves on to the development of modern forms of spirituality and offers his take on "the spiritual but not religious" phenomenon.

We have been emphasizing the linchpin role of practice in religion and spirituality since the release of Spiritual Literacy in 1996; now 16 years later, everyone seems to have gotten the message! Gottlieb charts the popularity of practices such as yoga, prayer, and meditation. He attributes the surge of interest and commitment to spirituality as having to do with the limits of wealth, the engines of diversity, and the appeal of freedom.

In the closing chapters the author writes about spirituality and its rigorous and helpful excursions into health, nature, and politics. Eschewing the heavy baggage of religious metaphysics (God, revelation, etc.), Gottlieb puts his faith in grace and in the human capacity for transformation. 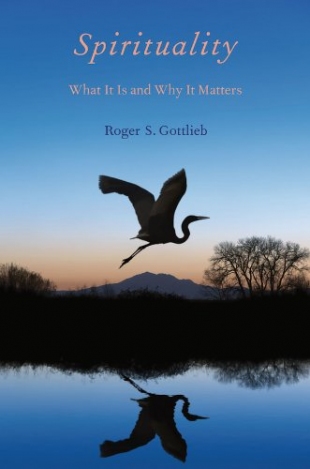