By David Robert Ord, Kurt Johnson
A map of the age of interspirituality presented with a rare blend of high-powered energy, enthusiasm, and zeal.

Brother Wayne Teasdale was a lay monk who combined the traditions of Christianity, Hinduism, and Buddhism in the way of the Christian sannyasa. A teacher and activist in building common ground among the world's religions, he also offered us many practical suggestions on living a mystical life of action and contemplation. Although Brother Wayne is no longer with us physically, his vision of the dawning of a new age of interspirituality has been carried on by Kurt Johnson, a scientist, comparative religionist, social activist, former monastic who is associated professionally with the One Spirit Interfaith Seminary and the multifaith Contemplative Alliance. Johnson has now co-authored this encyclopedic book with David Robert Ord, editorial director for Namaste Publishing.

Johnson notes that Brother Wayne coined the term "interspirituality" in his book The Mystic Heart, defining the term as "identifying and embracing the mystical core or common ground of the world's religions." This broad definition takes within its embrace solidarity with all human beings, benevolence, self-knowledge, simplicity of life, selfless service, compassionate action, and prophetic voice.

These are noble and important goals but Johnson wants to take interspirituality into even more ambitious and elaborate spheres of interest. After claiming that everyone is a mystic and pointing out how spirituality and religion differ, the author takes us back to the Big Bang and an erudite look at humans as multicellular creatures and the advent of intelligent life; he then swerves into the question as to whether or not we will be facing a biological endgame or not. Johnson presents the dawn of spirituality before heading off into his own takes on the great advances of human history, the renaissance and European enlightenment, and the rise of modernism.

All of this philosophy and history is necessary for us to understand and appreciate what he calls "the coming of a worldwide civilization" with two developments which reanimated spirituality: East-West Spiritual Cross-Pollination and Holism. Along the way, Johnson salutes the spiritual experience of consciousness, integral thinking, nonduality, new adventures in mysticism, and the end of the futile battles between religion and science.

Of course, all of these evolutionary advances in interspirituality are jeopardized by the formidable engines of war, corporate greed, gender violence, consumerism, the growing gap between the rich and the poor, and the refusal to square off with global climate change. Here the interweave between contemplation and action is most needed.

We were impressed with Johnson's heavy emphasis on unity consciousness, integral practice, collaboration projects among the world's religions, global compassion, and creative educational ventures in interspirituality. We also agree with his idea that interspirituality is "spiritual maturity." This concept opens many new doors for those of us on this path. That's what good books do and The Coming Interspiritual Age does it with a rare blend of high-powered energy, enthusiasm, and zeal. 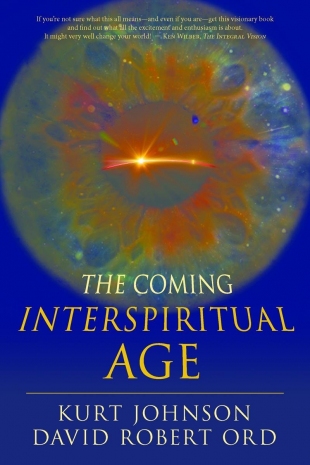