Up Above and Down Below

By Paloma Valdivia
A top-of-the-line children's book about living with differences and celebrating commonalities.

In the popular television show "Upstairs Downstairs," we got an up-close and intimate look at the very different lives of the rich and those who served them. Yet as the series continued to unfold, similar human behaviors appeared in both the upper-class aristocrats and the working-class men and women, such as envy, disappointment, grief, passion, and loneliness. In this top-of-the-line children's book written and illustrated by Paloma Valdivia (translated by Susan Ouriou), we are introduced to the differences between "those who live above and those who live down below" (you have to turn the book upside down to enter their world).

Members of the two communities notice the differences in the seasons and in the cycles of their labors. But when it comes right down to it, they are all members of one human family and should be able to see and appreciate the delights of both worlds with no dominance and no subjugation. Aimed at children from 4 to 6 years of age, this edifying book provides hope that the inequities of our times may give way to a more cooperative model of humans flourishing in community. 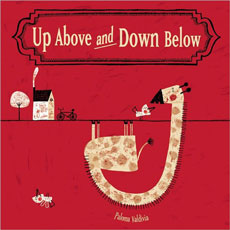