Air The Restless Shaper of the World

By William Bryant Logan
A tribute to air and all its bounties, beauties, and pleasures.

The air that we breathe is amazing. So writes William Bryant Logan:

"The air in every moment is a special gift. There is no other planet within twenty parsecs that has the like of it, and perhaps there is no other place anywhere at all that has such air. The air is the archetype of restless immanence. It is full of invisible movements and invisible contents. Through what it does and what it brings, it makes and unmakes the world it envelops. There is no actor more powerful on this earth, yet for the most part we studiedly ignore it."

Logan is a Quill & Trowel Award-winning writer, a member of the faculty at the New York Botanical Garden, a sought-after lecturer and teacher, and a practicing arborist. He is the author of Oak and Dirt; the latter was made into an award-winning film.

Logan is entranced with air and its workings. In this fascinating book, he gives many examples of its wonders.

• A cloud of dust leaving North Africa and bound for the Americas. The winds are strong enough to carry the particles three thousand miles and farther.

• The air is generous and gives rides to many hitchhikers: the spores of the fungi, rafts carrying bacteria, and drifts of pollen.

• Spinning storms represent the freedom of the air but to human beings caught in their wake, hurricanes and tornados can spell death and disaster.

• Painters love the sky: El Greco saw it as an active force alive and mysterious. It was something that would not sit still.

• Weather forecasters want to control the weather but their efforts usually miss the mark. The air does its own thing.

• Cranes love to ride the air; they are "among the most wonderful and versatile flyers in the world."

• The air carries smells and sounds for us and our senses are given a workout in this world of aromas and noises.

Logan concludes his lyrical tribute to air with a meditation on it as "a slow cold flame." 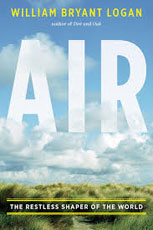