By Matthieu Ricard
A sumptuous anthology of Tibetan Buddhist wisdom and practices.

Matthieu Ricard is a Buddhist monk who had a promising career in cellular genetics before leaving France to study Buddhism in the Himalayas 37 years ago. He is a bestselling author, translator, and photographer, and an active participant in current scientific research on the effects of meditation on the brain. He lives in Nepal and dedicates much of his time to humanitarian projects in the Himalayas. His many books include The Monk and the Philosopher and Happiness: A Guide to Developing Life's Most Important Skill.

Ricard serves as editor of this sumptuous anthology of writings from all eight Tibetan Buddhist traditions. The criteria for the passages he selected were their clarity and the authenticity of their authors. Readers will also find the words of the Buddha himself and certain Indian Buddhist masters quoted in Tibetan literature.

Ricard starts with essays on "Turning the Mind to the Spiritual Path" and includes material on the value of human existence, reflections on impermanence and death, the law of cause and effect, the unsatisfactoriness of ignorance, and giving up the causes of suffering. Under "The Foundations of Practice" you will find commentary on altruistic love and compassion, the Six Perfections, acquiring merit, and the spiritual master.

In the section titled "The Main Path," Gyalse Thogme writes:

"In solitary places,
One has no enemy to defeat,
No family to protect,
No superior to respect,
Or servant to command.
What else is there to do, mani-reciters,
Than subdue one's own mind?"

We also enjoyed the advice of Gyalwa Yangonpa on bothersome habits:

"As an old parchment that curls around itself,
Negative tendencies tend to come back.
New habits are easily destroyed by circumstances.
You will not cut through delusion in an instant.
All you who consider yourselves great meditators,
Spend more time in meditation!" 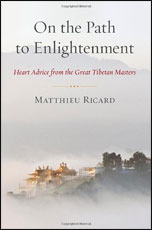