The Good Funeral Death, Grief, and the Community of Care

By Thomas Lynch, Thomas G. Long
A thought-provoking book on needed reforms in the funeral industry and what constitutes a good funeral.

In this thought-provoking book, by Thomas G. Long, Bandy Professor of Preaching at Candler School of Theology at Emory University, and Thomas Lynch, a funeral director and published author, take a rounded look at the funeral industry which over the past 75 years has been its "own worst enemy." Among the practices they attack are the selling of outrageous caskets, the trivialization of designer funerals where accessories are pre-eminent; and the recent trend of spiritualizing the service by keeping the body away and not encouraging expressions of grief.

The authors do a fine job explaining the four basic elements of funerals: the corpse, the caring survivors, some brokered change of status between them, and the disposition of the dead. Armed with the wit of Jessica Mitford who attacked some of the vulgarities of American funeral practices, Long and Lynch lampoon the modern memorial service where the body is not present to "get in the way of our spiritual reverie."

Here are four signs of a good funeral:

• A funeral ritual that involves direction and movement conveys the truth that the dead are going somewhere.

• The preparation of the body and the transport of it to a place of disposition shows that this act involves the labor of many hands.

• The choreography of a funeral, involving a processional moving across the land, tells an enacted story about life, death, and hope.

• Because a funeral moves through time, it speaks of the promise of transformation. 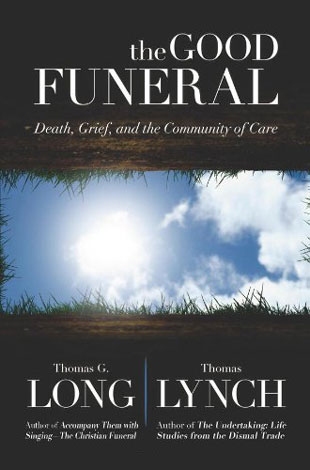