The Showings of Julian of Norwich A New Translation

By Mirabai Starr
A rich and robust translation of the fourteenth century mystical masterwork.

Mirabai Starr has done some remarkable translations of the writings of St. John of the Cross and St. Teresa of Avila. As a teenager she lived at the Lama Foundation, an intentional spiritual community dedicated to the exploration of the world's religions. She has been an adjunct professor of Philosophy and World Religions at the University of New Mexico-Taos since 1993.

Starr is a living icon of Brother Wayne Teasdale's understanding of interspirituality, which honors diversity and cherishes unity. At one point, Starr describes herself as a Jew with ecstatic Sufi inclinations, a lifelong devotion to a Hindu guru, a committed Buddhist meditation practice, and the author of a dozen books on Christian mysticism.

In 1373, a 30-year-old woman living in East Anglia, England, named Julian began receiving visions of Jesus, which she called "sixteen showings." Mirabai Starr brings new life and relevance to these mystical messages. Among the teachings she locates in these gifts are:

• An assurance of God's motherly love for us.
• The revelation that we were made for love.
• There is no wrath in God.
• There is a "Goodness" that permeates all things.
• Grace is our shelter; know that God will never leave us.
• Everyone is welcome in eternity.
• Have no fear — all will be well.
• Joy is our birthright.
• You will not be overcome.
• Be like Christ. 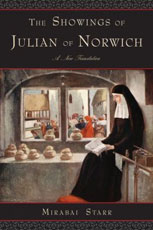