By Harmen van Straaten
An alluring tale for children about yearning, freedom, and toys.

The snowman was sad. It hadn't snowed in the snowman's little globe for ages. His music was out of tune, and he had not been enjoyed or played with for a long time. Then a golden angel on top of the clock grants him one hour of freedom from his globe. Eagerly, the snowman heads for the street where he spends some enchanting time dancing with a music box ballerina. Then he scurries back to his snow globe, yearning to be with her forever. Will their dream come true?

Harmen van Straaten has fashioned an alluring children's picture book that will definitely speak to kids familiar with the Toy Story animated films about toys who have secret adventures. The Snowman's Wish is targeted for children from ages four to eight years old. 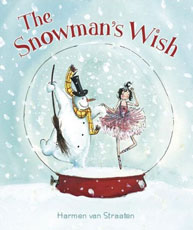