To Save Everything, Click Here The Folly of Technological Solutionism

By Evgeny Morozov
An attack on solutionism and Internet-centrism.

Evgeny Morozov is a contributing editor to The New Republic and author of The Dark Side of Internet Freedom, a New York Times Notable Book of 2011 and winner of Harvard's Kennedy School's 2012 Goldsmith Book Prize. He calls himself a "digital heretic" and that isn't far off the mark. In the first two chapters of this mammoth critical work, he takes on the two ideals which have been broadly celebrated by Silicon Valley gurus: "solutionism" and "Internet-centrism." These believers are convinced that technology can improve our lives and the well-being of the planet. Jeff Jarvis, a pro-Internet writer has observed: "Owning pipelines, people, products, or even intellectual property is no longer the key to success. Openness is."

Morozov cringes when he hears devotees of the Internet waxing poetic about openness as a virtue that will make us more hospitable, enrich our civic life, and promote transparency in all walks of life. The author rejects openness as a fail-safe solution to almost any problem.

One of the dark developments of "Internet-centrism is "the memification of public life " whereby everything is assessed by how well the intended audience is likely to react given what is known about that audience. Morozov casts his net wide in order to catch and criticize other aspects of technological idolatry. He questions that technology can really reform the political system, improve efficiency in the cultural sector, and reduce crime through smart environments and data. He also objects to our trying to quantify the world in which we live through self-tracing and life-logging. 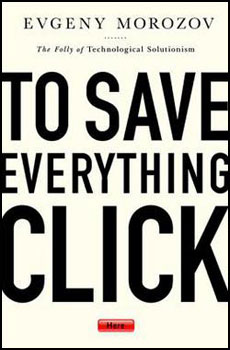