Unretirement How Baby Boomers Are Changing the Way We Think About Work, Community, and the Good Life

By Chris Farrell
A charting of the new movement of unretirement.

Farrell is dismayed by the alarming reports on the negative economic and social effects of an aging America. Demographers estimate that more than 20 percent of the population or nearly 81 million will be 65 or in 2030. What's new is that many of these people are entering what is called "unretirement." Farrell notes: "Whereas the old images of retirement are the golf course and the RV, the defining institutions of unretirement are the workplace and the entrepreneurial start-up."

Marc Freedman is the visionary for the "encore" movement, where people are choosing to take on new responsibilities in retirement. "Never before have so many people had so much experience and the time and the capacity to do something significant with it," says Freedman.

The Boomer generation is ready to experiment and improvise with their working lives, entrepreneurial adventures, and volunteer service. They agree with the band Fleetwood Mac who counseled us "Don't stop thinking about tomorrow / Don't stop, it'll soon be here."

Farrell snaps us to attention with chapters on the movement against old age stereotypes; a brief history of the radical idea of retirement, rewiring the social compact, the Us Generation, third-age entrepreneurs, aging boomers on the job, and more. Be sure to check out the Appendix and DIY Research listing a variety of website and other resources for those interested in encore careers and second acts. 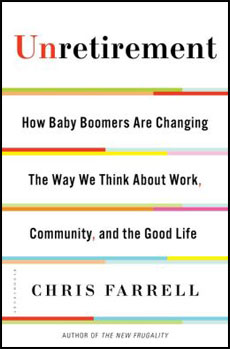