By Stephen P. Huyler
An absolutely stunning and illuminating book that captures Hindu belief and practice.

Art historian, cultural anthropologist, and photographer Stephen P. Huyler has assembled an absolutely stunning and illuminating book that captures and conveys Hindu belief and practice. Over the past ten years, he studied the sacred arts and rituals of ordinary Indians whose "conscious awareness of the Divine permeates every aspect of daily and seasonal life." Huyler's 160 color photographs reveal the ardor and the beauty of worship in the home, the temple, and the community. He beautifully fulfills his goal of presenting the variety of devotional life among Hindus who number one-sixth of the world's peoples (there are 1.2 million adherents in the United States).

Huyler views this religion as one in "complete harmony with change, adaptation, modernization, and growth, as it affects every aspect of every day of most Hindu Indians." He examines the different elements of worship including puja, dharma, karma, varna, and Brahmanas. In this religion of millions of gods and goddesses, each individual has a deity of personal choice, a deity of family, and a deity of the community. Rituals are performed at household shrines, in temples, and in annual celebrations where the deities are on parade.

Huyler discusses the various festivals and holy days along with the gods and the goddesses associated with them. He concludes with a remarkable chapter on the devotional duties of the elderly Indians in the last stage of life. Whether discussing darshan, images as receptacles for spiritual energy, or the common symbol of hospitality in Hinduism (pots with coconuts), Huyler salutes the practices that link the spiritual and the practical in everyday life. 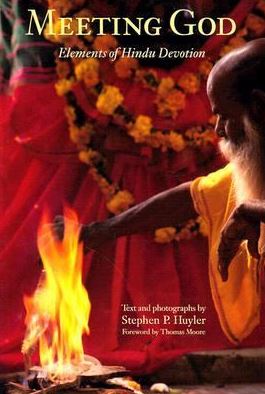