The New Monasticism An Interspiritual Manifesto for Contemplative Living

By Adam Bucko, Rory McEntee
An exploration of the dawning of a new age of monasticism and interspirituality.

Wayne Teasdale (1945-2004) was a lay monk who combined the traditions of Christianity and Hinduism in the way of the Christian sannyasa. In The Mystic Heart (1999), he presented a bold and imaginative picture of the dawn of a new age of interspirituality when people of all traditions would be encouraged to explore the spiritual dimensions of any religion. In A Monk in the World, Teasdale sought to reframe monasticism by encouraging us to all be monks practicing an integral spirituality where we live, work, or play.

The New Monasticism is in a very real sense part of Teasdale's legacy. Rory McEntee serves as Executive Director of the Foundation for New Monasticism and helped found the Interspiritual Movement, which are both deeply indebted to Teasdale's pioneering work. Adam Bucko is an activist, spiritual director to many of New York City's homeless youth, and co-author of Occupy Spirituality: A Radical Vision for a New Generation, which we chose as one of the Best Spiritual Books of 2013.

In their introduction, the authors describe their book as a rallying call for new types of spiritual life and communities; as an overview of the theological, philosophical, and contemplative foundations behind the new monasticism; and as a whole-hearted advocacy of interspirituality as an approach that can accelerate human spiritual growth and maturity.

In a very cogent section of the book, McEntee and Bucko outline the essentials of the new monasticism: daily, weekly, monthly, and yearly practice; sacred activism; formal study; shadow work; spiritual direction; spiritual friendship and community; and a commitment of vows.

The authors leave behind the clarity of this fresh vision of the new monasticism and descend into an arcane and scholastic second section where McEntee's writings on "Dialogical Dialogue" and "Dialogical Sophiology" prove to be stumbling blocks to anyone seeking helpful guidance on the interspiritual path. The fog lifts when the two authors share lessons learned from a series of dialogues where they give their attention to mentorship, spiritual direction, and a new generation of seekers.

Along the way to the finale, McEntee and Bucko explore "The Nine Elements of Spiritual Maturity," as spelled out by Wayne Teasdale in The Mystic Heart. They pay tribute to the wisdom, guidance and inspiration they have received over the years from Father Thomas Keating who has written an "Afterword" for this paperback. He gives credit to the Holy Spirit for "the good energy" of the New Monasticism. 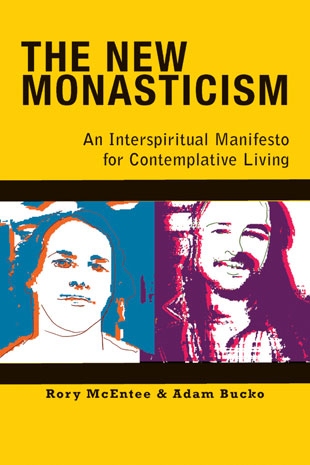