By Erik Loomis
A survey of the dire consequences when American companies move their production facilities to poor countries.

In a Nutshell: U.S. corporations are moving their production facilities overseas, thus outsourcing industrial risk to the world's poor. They are doing this to escape U.S. government regulations designed to protect workers, to lessen environmental degradation, and to insure the quality of life for those living nearby. What they are actually doing is shifting catastrophes to poorer countries.

About the Author: Erik Loomis is an assistant professor of history at the University of Rhode Island. He blogs at Lawyers, Guns, and Money on labor and environmental issues past and present. Loomis's grasp of labor history adds a needed dimension as he unfurls various catastrophes from the past including the 1911 deadly fire at the Triangle Shirtwaist Factory in New York City; the gas leak in the 1984 Union Carbide pesticide plant in Bhopal, India; and the deaths of more than 1,100 workers in the 2013 collapse of the Rana Plaza garment factory in Bangladesh.

Sum & Substance: Supported by trade agreements, free trade zones, and labor law exceptions, U.S. companies are moving their factories overseas where they are ignoring the safety and health of workers, dumping their factory wastes into the rivers and air, and bringing untold suffering and pain to the global poor. Such corporate mobility has also had a dire effect on organized labor in the U.S.; only 11 percent of the workers and over half of all union members reside in just six states. The dream of creating "a just, equitable world where people can live and work in dignity, where ecosystems remain healthy and whole, and where corporate interests are balanced with the interests of the working class and the planet" seem further than ever from reality.

Loomis also has some critical things to say about the irresponsibility of corporations in the food industry and the climate change nightmare. He makes some personal suggestions on "The Way Forward": fair paying jobs, environmentally responsible business practices, sustainable economic growth, government action to fight climate change, reformation of the corporate food system, restoration of the tax rates to 1960s levels and immigration reform. Loomis ends with five concrete steps citizens can take to tame corporate behavior.

"When corporations have the ability to move production sites around the world, it undermines the American middle class while intensively exploiting the world's poor. No one's job is safe and no one can organize for a better job when companies can move so easily. Busted labor unions, pollution, unsafe workplaces, and economic instability result when multinational corporations hold us all hostage to their whims."
-- Erik Loomis

"Outsourcing toxic work means that Americans are safe from the costs of their consumption, but the world's poor live with the risk. Breathing in the particulate matter from heavy industry or choking on thick smog is one of the most powerful ways one can experience the environment. No one should need to choke to death on smog or suffer asthma in order to work, go to school, or walk in the neighborhood. Yet this happens to millions of people in the world today."
-- Erik Loomis

* The Age of Acquiescence: The Life and Death of American Resistance to Organized Wealth and Power by Steve Fraser

* Caring Economics: Conversations on Altruism and Compassion, Between Scientists, Economists, and the Dalai Lama edited by Tania Singer and Matthieu Ricard

* The Unwinding: An Inner History of the New America by George Packer 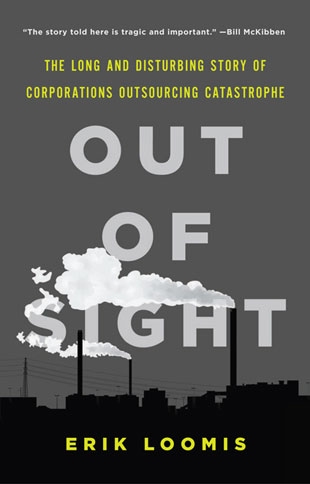