Beyond Words What Animals Think and Feel

By Carl Safina
A watershed work on the emotional lives of elephants, wolves, and orcas.

"Watch. Simply listen. They will not speak to us, but to one another they say much. Some of it, we hear. The rest is beyond words. I want to listen, to open to the possibilities," writes Carl Safina, an award-winning professor at Stony Brook University who has written six other books on a variety of ecological themes.

In this majestic work of keen insight and deep respect for animals, he travels to Kenya to pay attention to elephants who show empathy in the presence of a wounded or ill comrade. They also manifest feelings of grief which can last for over two years. Noting the connections with human beings, he writes: "An elephant nursing a baby is so like us that she might as well be my sister."

Safina observes wolves in Yellowstone and comes to admire their social loyalty. "Wolves may not have words. What they have is: recognition, motivation, emotion, mental images, a mind map of their landscape, a roster of their community, a bank of memories and learned skills, and a catalog of scents with meanings attached as definitions." Comparing them to dogs, he notes that what they know is more than enough to understand who's who and what's where.

In the last section, Safina ponders the behavior and activities of orca whales in the Pacific Northwest. He also shares vignettes about parrot grief, his own dogs, and dolphins.

By the time you have finished this watershed work you will be poised to challenge those who emphasize the barriers that separate human beings from animals. You will be able to speak to the wonderful versatility of animal personalities, the similarity between human and nonhuman consciousness, and the need for more empathy as we forge a convivial future for our mutual place in the world as allies and partners. 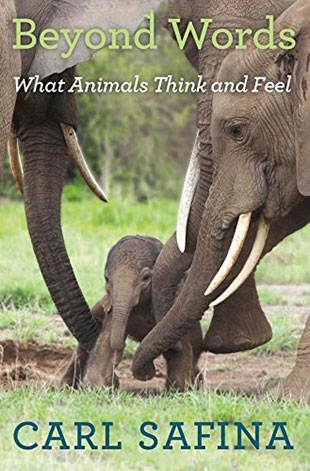