Islam and the Future of Tolerance A Dialogue

By Sam Harris, Maajid Nawaz
Discussion of the extremists within Islam.

In this little book, the busy public atheist Sam Harris, author of The End of Faith, has a dialogue with Maajid Nawaz, the author of Radical and a cofounder and chair of Quilliam, a globally active think tank. They discuss religious freedom, extremism, and citizenship. The challenge is to take seriously Islam as a path of devotion and meaning to 1.6 billion Muslims.

Harris tries to paint this religion as one that advocates violence and seeks to impose its rigid views on others; he calls these believers Islamists and estimates they comprise 20 percent of Muslims. Nawaz
claims that most traditional Muslims consider Islamism "an errant politicalization of their religion." He works with conservative Muslims through his organization and has upset them with an advocacy of gender rights and personal freedom.

Among the other topics which are discussed are Harris's contention that sometimes the only ones making accurate assessments of the dangerous motivations of Islamists and jihadists are not the liberal media but dangerous bigots. Nawaz addresses the need to champion reformist interpretations of the Qur'an. Harris then calls upon Muslims to address the demonization of infidels, the idolization of dying in defense of the faith, and the Taliban's massacre of 145 in Peshawar, Pakistan.

The two men do arrive at a consensus that a move through pluralism and then secularism by Muslims is what is needed. Nawaz concludes "Reforming our approach to Islam in the modern age is a huge task, but it has to start somewhere." Next time around we need to hear from a Sufi sheikh who can address these volatile problems from a spiritual point of view. 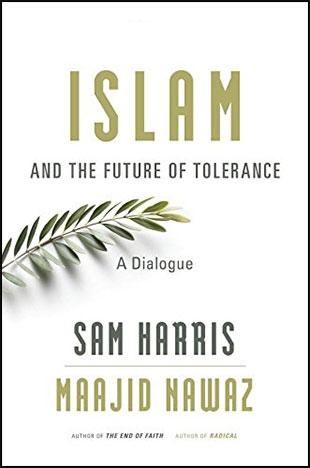