By Wen Stephenson
A journalist's reflections and interviews with more than 100 climate and environmental activists.

This is from one of 100 interviews by Wen Stephenson with more than 70 individuals involved in climate and environmental justice. He is an independent journalist and climate activist, contributing writer for The Nation, a former editor at The Atlantic and The Boston Globe. He was most recently the senior producer of NPR’s "On Point."

The author quotes Henry David Thoreau who wrote in Civil Disobedience: "Let your life be a counter-friction to stop the machine.” The question is not whether we're going to stop global warming or solve the climate crisis but whether we are going to act quickly enough to save civilization. Stephenson salutes the September 11, 2014, People's Climate March in New York City which drew over 300,000 people. One of the slogans for the demonstration was: "To change everything, we need everyone." Right on!

Stephenson sees the climate struggle as a spiritual crisis which compels us to ask the deepest and most radical questions about ourselves. In a chapter called "Walking Home from Walden," Stephenson shares some of his ideas on climate change before moving on to mapping the present-day movement comprised of old-time environmentalists, young climate justice movers and shakers, activist community leaders, Quakers, college students, evangelicals, and Occupiers. Stephenson then discusses ideas and insights by some of the most radical spokespersons for climate justice: Bill McKibben, Wendell Berry, Bob Bullard, Naomi Klein, and others. What all of these radicals are fighting for is for survival of the planet and of ourselves! 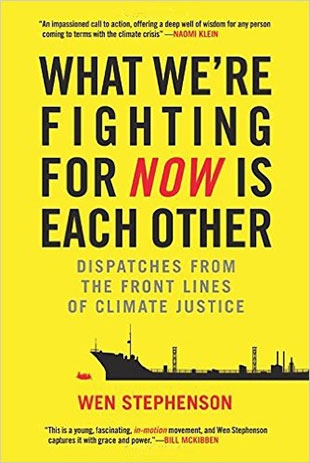