The Hour of Land A Personal Topography of America's National Parks

By Terry Tempest Williams
A tribute to America's parks and a prophetic call to reverence the wilderness as a sacred domain.

Terry Tempest Williams is the award-winning author of 15 books including Refuge: An Unnatural History of Family and Place, Finding Beauty in a Broken World, and When Women Were Birds. One of our very favorite nature writers, she is featured in S&P's Living Spiritual Teachers Project.

Terry Tempest Williams has been called "a citizen writer" — one who speaks out eloquently on behalf of an ethical stance toward life. She has worked as the Naturalist-in-Residence at the Utah Museum of Natural History and remains a passionate advocate for the preservation of the American Western wilderness. In her essays and books, she shows us how environmental issues are social issues that ultimately become matters of justice.

In this impressive work, she pays tribute to America's national parks which are visited by more than 300 million people every year. Here are exquisitely written essays on:

You'll want to read this book before you visit these parks – and it will inspire you to want to protect them. Williams reveals the ways in which our lives as citizens are renewed and revitalized in public lands. She muses:

"I return to the wilderness to remember what I have forgotten, that the world can be wholesome and beautiful, that the harmony and integrity of ecosystems at peace is a mirror to what we have lost."

Williams has always located the matrix of her spiritual life in the wild. It is in this milieu that she discovers a realm going beyond ourselves, even beyond our own species. The wilderness humbles us. We can't help but bow during the moments of awe and wonder we experience in our encounters with animals, trees, plants, flowers, sun, and light.

Williams is baffled by the continuing march of consumerism which she sees as a national disease. She is saddened by the aggressive advance of those who are willing to bulldoze wildlife refuges and shoot wolves and grizzly bears. Speaking out as a prophet, she proclaims: 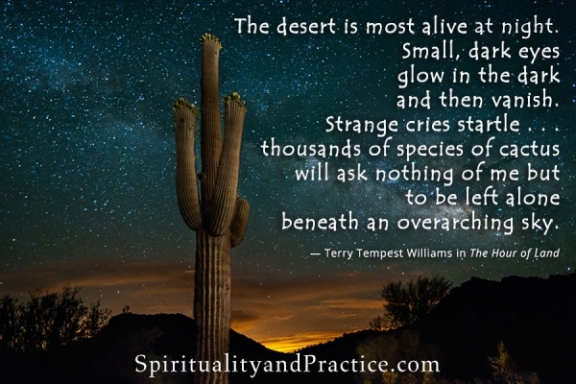 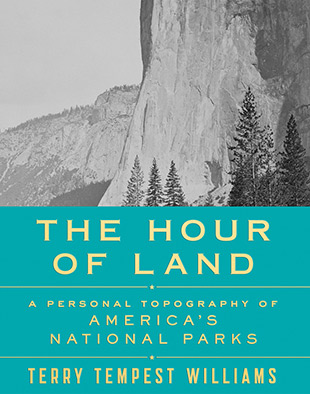