By James Hoggan, Grania Litwin
A call for an end to the pollution of public discourse and the creation instead of constructive dialogue.

James Hoggan has been immersed in the challenges of "how we create the space for higher-quality public debates where passionate opposition and science shape constructive, mind-changing conversations." A Canadian, he is a public relations specialist, chair of the David Suzuki Foundation board, founder of the influential website DeSmogblog, and the author of books on science propaganda and misinformation campaigns.

This timely book takes a hard look at the widespread pollution of public discourse and its result in political gridlock. We need to aim for common ground instead of polarization, dialogue instead of demonization, and a change of behavior from being name'em, blame'em, shame'em advocates to becoming collaborators working with others on the many global problems facing us.

In the "Prologue," Hoggan draws on the ideas and perspectives of Deborah Tannen who lambastes the combative style of public debate about climate control, immigration, and gun control which has led to a public atmosphere of mistrust and disinterest. He further explores his subject through interviews with leading thinkers in the field.

Jonathan Haidt sheds more light on the moral matrix that both binds and blinds; he affirms empathy as a commendable factor in seeking a deeper understanding of the world around us. Other rousing essays are those by George Lakoff on why facts are not enough; Jason Stanley on silencing the voices of others; Otto Scharmer and Anne Giardini on deep listening; Paul Slovik on psychic numbing; and spiritual perspectives by Karen Armstrong, Joan Halifax, Thich Nhat Hanh, and His Holiness the Dalai Lama. 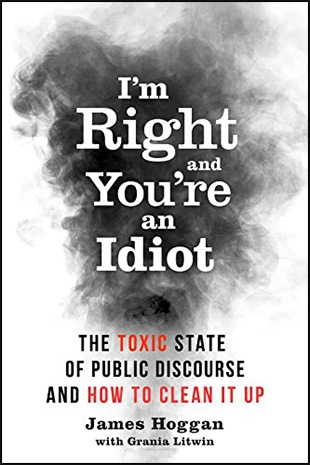