Indian Boyhood The True Story of a Sioux Upbringing

Charles Eastman (Ohiyesa) was the first great Native American spokesperson, publishing eleven books from 1902 – 1918. He was born in a buffalo hide tipi in western Minnesota and lived until age 15 in the traditional Dakota Sioux way. Then he was transplanted into the white world where he became a medical doctor, caring for his own people after the Battle of Wounded Knee. He also was the co-founder of the Boy Scouts of America.

In this book, Eastman tells the story of his early life, which he describes as "fragmentary recollections of my thrilling wild life." First published in 1902, the book is a classic in literature about Native Americans. It has now been edited for children by Michael Oren Fitzgerald who previously published Living in Two Worlds: The American Indian Experience, an impressive and soul-stirring presentation of Eastman's writings for adults. llustrations by Heidi M. Rasch capture the colors, the natural life, and the atmosphere of Indian life on the plains.

Told in first person, here are wonderful details about Ohiyesa's childhood and his preparation for life as a warrior and hunter. He writes: "It was common for birds to land on my cradle in the woods." He and the other boys "sled down hills on the ribs of animals during the winter." At one point, he had a grizzly bear for a pet. He was taught to observe nature:

"Every boy was trained to find new and strange things in the woods. If a bird had scratched the leaves off the ground, we stopped to speculate on the time it was done. An old deer-track brought a discussion as to whether it was a buck or a doe. Every hunt combined the study of animal life. We often marveled at the many beauties and forces of nature."

He describes telling stories, participating in dances, searching for medicinal roots in the woods with his grandmother, and hunting with his uncle. The book ends as Ohiyesa's father, who had disappeared when the boy was six, returns to the village and takes him to the white man's town for school.

This book introduces children of all backgrounds to a great Native American leader through the lens of childhood. It will appeal to any child who wonders what it would be like to grow up in a different culture. 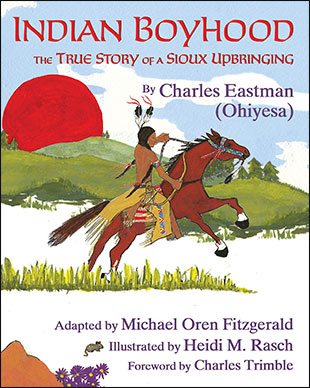