Pope Francis — the 266th pontiff of the Roman Catholic Church — was elected on March 13, 2013. Since then, he has become the most influential religious leader in the world, drawing praise and admiration from people of all faiths. The five works published in this paperback were issued from June 2013 – March 2016. Members of Catholic parishes are encouraged to study these teachings. It would also be good for non-Catholics to read and reflect on them since Pope Francis has intended them to be resources for the global community.

1. Lumen Fidei (The Light of Faith) is an encyclical on the centrality of faith, the relationships between reason and faith, the Church's role in the transmission of faith, and how faith results in redeeming the world.

"Faith is not a light which scatters all our darkness, but a lamp which guides our steps in the night and suffices for the journey."

2. Evangelii Gaudium (The Joy of the Gospel) This apostolic exhortation has been called Pope Francis's manifesto. It challenges all Christians to approach evangelization anew and overcome complacency in order to fulfill Christ's greater mission.

"The dignity of the human person and the common good rank higher than the comfort of those who refuse to renounce their privileges. When these values are threatened, a prophetic voice must be raised."

3. Misericordiae Vultus (The Face of Mercy). This papal bull called for an a Holy Year to be observed by the Church, an Extraordinary Jubilee of Mercy.
"Let us open our eyes and see the misery of the world, the wounds of our brothers and sisters who are denied their dignity, and let us recognize that we are compelled to heed their cry for help! May we reach out to them and support them so they can feel the warmth of our presence, our friendship, and our fraternity! May their cry become our own, and together may we break down the barriers of indifference that too often reign supreme and mark our hypocrisy and egoism!"

4. Laudato Si (Praise Be to You: On Care for Our Common Home). In this landmark encyclical, Pope Francis offered prophetic teachings for the entire Church — and the world — on climate change, human responsibility, the role of faith in how we live among God's entire creation, and the future of the planet.

"If we acknowledge the value and the fragility of nature and, at the same time, our God-given abilities, we can finally leave behind the modern myth of unlimited material progress. A fragile world, entrusted by God to human care, challenges us to devise intelligent ways of directing, developing, and limiting our power."

5. Amoris Laetitia (On Love in the Family). This exhortation was published after the Synods on the Family. In it, Pope Frances ranges widely quoting St. Thomas Aquinas, Dr. Martin Luther King, Jr., and the film Babette's Feast.

"Virtue is a conviction that has become a steadfast inner principle of operation. The virtuous life thus builds, strengthens, and shapes freedom, lest we become slaves of dehumanizing and antisocial inclinations. For human dignity itself demands that each of us 'act out of conscious and free choice, as moved and drawn in a personal way from within.' " 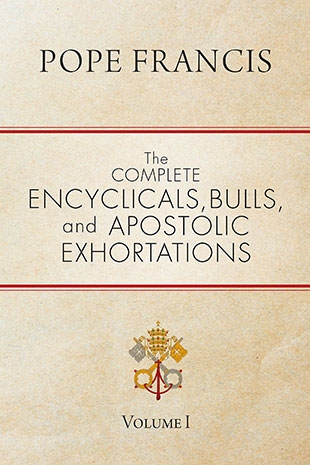