The Attention Merchants The Epic Scramble to Get Inside Our Heads

By Tim Wu
A survey of the ways that capitalists have used various technologies to steal our attention and privacy.

Tim Wu, an author, policy advocate, and professor at Columbia University, best known for coining the term "net neutrality". "It is not our nation or culture but the very nature of our lives that is at stake," he writes in this substantive work. "For how we spend the brutally limited resource of our attention will determine those lives to a degree most of us may prefer not to think about. As William James observed, we must reflect that, when we reach the end of our days, our life experience will equal what we have paid attention to, whether by choice or default."

The well-versed author looks back in time to see how the editors of New York City's penny press newspapers were able to make money by harvesting attention. These clever capitalists were the pioneers of advertising. Wu then moves through the glory days of radio and television; those entrepreneurs clawed their way into our minds and homes and even managed to steal time set aside for family dinners. The latest band of attention merchants are making the most of the personal computer, the Internet and the "fourth screen" of our mobile phones.

Wu has some cogent things to say about the brain and attention; the efforts of Christian communities to capture attention through programs and worship services; the mind control efforts of government mass recruiting campaigns; advertising's efforts at demand engineering , branding, and "targeted engineering"; the impact of the Nielsen ratings for radio and television; the attempt to control attention mounted by the Nazi's extensive propaganda programs; Vance Packard's bestseller and its expose of advertising's manipulation of minds; our celebrity culture; the rise of clickbait; and Facebook's heavy investment in tracking technologies.

The Attention Merchants shines a bright light on the tools and technology that has stolen our time and privacy. 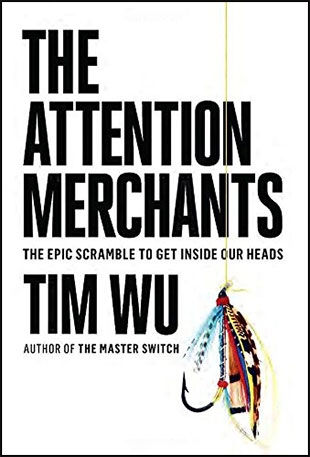