By Roxanne Dunbar-Ortiz, Dina Gilio-Whitaker
An expose about American ignorance and continuing prejudice against Native peoples and their cultures.

Roxanne Dunbar-Ortiz grew up in rural Oklahoma, the daughter of a tenant farmer and part- Indian mother. She has been active in the international indigenous movement for more than four decades. Dunbar-Ortiz is the author or editor of eight other books including An Indigenous Peoples' History of the United States, a recipient of the 2015 American Book Award.

Dina Gilio-Whitaker is an award-winning journalist and columnist at Indian Country Today Media Network. She is currently a Research Associate and Associate Scholar at the Center for World Indigenous Studies.

According to Dunbar-Ortiz and Gilio-Whitaker, "most US citizens' knowledge about Indians is inaccurate, distorted, or limited to elementary-school textbooks, cheesy old spaghetti westerns, or more contemporary films like Dances with Wolves or The Last of the Mohicans.
Few can name more than a handful of Native nations out of the over five hundred that still exist or can tell you who Leonard Peltier is."

The result of this ignorance is the continuing erasure of Indians from the US political and cultural landscape. The authors present 21 myths about Native Americans. Here are a few of them:

While many textbooks continue to do a poor job with Native American history, this paperback correctly acknowledges and addresses the growing thirst for accurate information about Indians. It should be in every school and library. 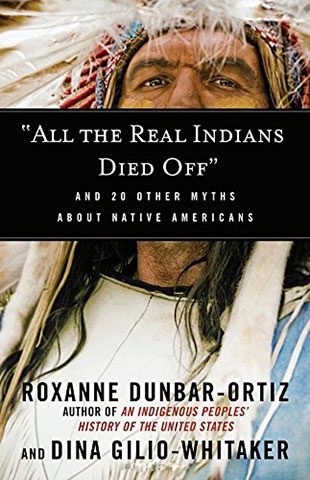