By Pat Kiernan
A picture book that celebrates all the ways a city wakes up each day.

According to the United Nations, 54% of the world’s population was living in urban areas in 2014, a proportion that is expected to increase to 66 per cent by 2050. So it's a good to have a children's picture book that celebrates everyday events in a city. Pat Kiernan, the author, lives with his wife and children in Brooklyn, New York; he wakes up early for his job as a morning news anchor. Pascal Campion, the illustrator, lives with his wife and children in Los Angeles.

If you are up and about in the city in the morning, you'll see that's it's busy in the bakery, newspapers are being delivered, the ferry boat is starting its rounds, dogs are being walked, joggers are running, delivery trucks are bringing food to the market, traffic is moving, people are having breakfast at the diner, trash is being collected, children are getting on the school bus, construction crews are working, and a little girl and her baby brother are waking up as the sun streams in their windows.

Paying attention is a spiritual exercise in all the world's religions. This book encourages us to notice how our days begin and be grateful for all the gifts of city life. 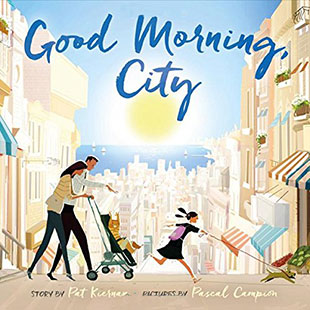