By Tom Nichols
A hard-hitting and edifying examination of the consequences of anti-intellectualism and egalitarianism in the United States.

"For laypeople to use expert advice and to place professionals in their proper roles as servants, rather than masters, they must accept their own limitations as well. Democracy cannot function when every citizen is an expert. Yes, it is unbridled ego for experts to believe they can run a democracy while ignoring its voters; it is also, however, ignorant narcissism for laypeople to believe that they can maintain a large and advanced nation without listening to the voices of those more educated than themselves." This keen observation is from Tom Nichols, professor of National Security Affairs at the US Naval War College and an adjunct professor at the Harvard Extension School.

The 2016 U.S. Presidential election was filled with curmudgeonly criticisms voiced by outspoken candidates about the poor condition of the country due to the egregious mistakes and floundering policies of the elite known as experts. Cultural analysts note that rising global populism and the Internet are the chief contributors to what the author calls "the death of the ideal of expertise itself."

This anti-rationalism and rebellion against authority has been around for a long time. We recall the storm of debate over Richard Hofstadter's 1963 Pulitzer Prize-winning book Anti-Intellectualism in American Life. Nichols is troubled by what he sees as a distressing state of affairs:

"Americans have reached a point where ignorance, especially of anything related to public policy, is an actual virtue. To reject the advice of experts is to assert autonomy, a way for Americans to insulate their increasingly fragile egos from ever being told they're wrong about anything. It is a new Declaration of Independence: No longer do we hold these truths to be self-evident, we hold all truths to be self-evident, even the ones that aren't true. All things are knowable and every opinion on every subject is as good as any other."

The Death of Expertise: The Campaign Against Knowledge and Why It Matters is a hard-hitting critique of intellectual egalitarianism which has made debate subject to the narcissistic needs of politicians and voters alike. How are decisions to be made, public policies to be determined, and the common good defined when everything and everybody is assumed to be equally true? Does the Information Age signal the end of democracy? Read this book for ample evidence of what is happening and troubling warnings about the potential consequences. 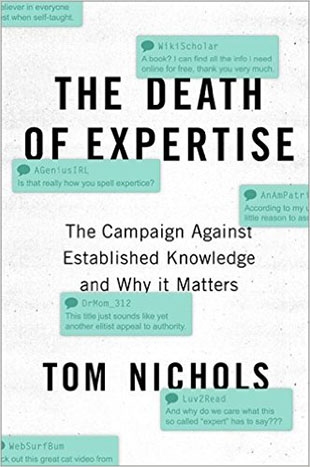