By Ron Powers
A strong argument for doing much more to help mentally ill people.

There are some 10 million Americans with mental illness and only 45,000 in patient psychiatric beds, resulting in untold suffering for those unfortunate souls who face one crisis after another, including homelessness, hospitalization, and prison. As it stands now, jails are the best bet for care of those afflicted with mental illness. Worst of all is the following statistic: Of the 38,000 suicides a year, 90% are mentally ill individuals.

As Nicholas Kristof wrote about in his New York Times column: "All across America and the world, families struggle with these issues but are more likely to cry quietly in bed than speak out. . . . In polite society there is still something of a code of silence around these topics."

In this book Ron Powers, a Pulitzer Prize winning journalist and New York Times bestselling author, writes about his journey with two sons who were diagnosed with schizophrenia. He sets the stage of what happened to his loved ones by presenting a general and then a personal history of mental illness.

Ron's younger son Kevin started showing symptoms of schizophrenia when he was 17 and three years later, he committed suicide. Ron's role as a nurturing father is contrasted with the his rage his own helplessness in the face of mental illness along with sadness that there are few services for those who need loving care and attention. Dean, their eldest son, also tries to kill himself but is rescued.

Hats off to Ron Powers for the intensity, courage, and compassion in the telling of his story and in making such a good case for doing much more to help mentally ill people. 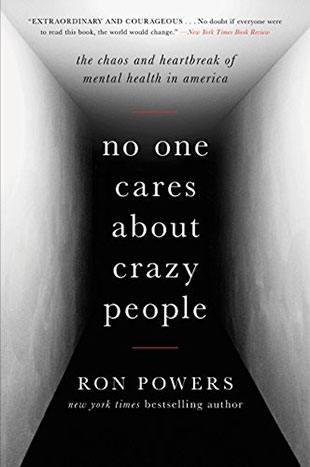