We Need To Talk How to Have Conversations That Matter

By Celeste Headlee
A bold and wise book about the skills needed to have our conversations open the doors to new possibilities.

Remember the film Cool Hand Luke where one of the characters says: "What we've got here is a failure to communicate"? Cultural critics point out that in these days ever greater numbers of people feel themselves isolated and separated from others in their private lives. Kids are not learning conversation skills, and more and more businesses are being hurt by bungled communications with their patrons or clients.

According to Celeste Headlee, the host of the daily news show On Second Thought on Georgia Public Broadcasting, Americans are now more polarized than at any time since the Civil War. Those on both sides of the political divide find it not worth their while to even speak with the other.

That is a shame given the fact that conversation when used wisely and properly can open up enemies and move them toward common ground. Headlee outlines some of the ways in which the increased use of technology, social media, and texting have led to the decline of the critical human skill of empathy. With a dash of spice, the author questions habits, such as nodding your head and looking directly in the other person's eyes, which have been promoted as making for good communications.

Here are a few things to try while talking with others: show respect at all times; acknowledge your blind spots and your biases; persevere in your efforts to have meaningful talk; realize that most conversations will not end with a hug and an epiphany; and keep in mind that you do not have to have the last word.

Headlee closes this substantive book, which is the result of five years of research, with advice designed to lead to "better conversations, deeper connections, and richer relationships." Some of the important topics she fleshes out are: the exaggerated benefits of multi-tasking, the art of becoming mindful, and the problem of conversational narcissism. She advises us to refuse to make arguments personal, to not use conversations to convince people you are right, to discipline yourself to keep conversations short, to express your concerns by asking plenty of questions, to acknowledge the limitations of your knowledge, and — best of all — to be a good listener! 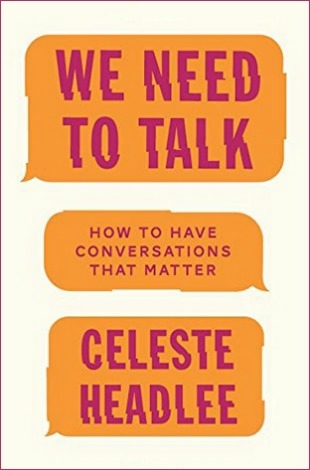