The World Wisdom Bible A New Testament for Global Spirituality

By Rami Shapiro
A collection of sacred texts illustrating the sweep of global spirituality.

One of the great blessings of these times is the easy access to an abundance of resources from many religions and spiritual paths. Rami Shapiro is a pioneer of interspirituality, having spent years exploring the many ways the traditions intersect around common themes and practices. Through his One River Foundation, he has sought to share the perennial wisdom of the world's religions and to demonstrate that God is a lover of variety.

In his book Perennial Wisdom for the Spiritually Independent, Shapiro addressed the needs and desires of the 20 percent of the American population who self-identify as unaffiliated with any religion; he calls them "seekers without borders." Like people who find good ideas and policies in different political parties but choose not to join one in particular, spiritual independents are making their own way. The World Wisdom Bible is perfect for them, as well as for people who are followers of a particular religion but are interested in multifaith understanding.

In the introduction, Shapiro defines religion as "a way we humans make meaning out of the raw facts of existence. It is a human creation reflecting and shaping the civilization from which it comes." A bit further on, he suggests that each religion speaks to a facet of your experience. For example, Hinduism addresses reality versus illusion; Judaism deals with the problem of alienation from God; many denominations of Christianity consider the existential problem of sin; and Islam examines the consequences of falling prey to pride.

In eight chapters, Shapiro draws on texts from Christianity, Judaism, Islam, Buddhism, Hinduism, Confucianism, and Taoism as examples of global spirituality. These passages, each identified by source, are organized creatively around themes of the religious and spiritual life:

To give you an idea of the breadth of wisdom included here, in the chapter on "Living Wisely," there are passages from the Dhammapada, Proverbs, Ecclesiates, the Psalms, the books of John, Matthew, and James, The Qur'an, the Sayings of the Desert Fathers, the Gospel of Thomas, the Pirke Avot, and more.

Three helpful appendices cover "Warnings from the Dark Side" (observations on hate, fear, war, violence, misogyny, and genocide); Eight Points of Agreement for forming a perennial wisdom community; and the global ethic in the United Nations' Universal Declaration of Human Rights.

Shapiro has come up with a salutary idea of placing The World Wisdom Bible in hotel rooms next to its older cousin, the Gideon Bible. We certainly would enjoy spending an evening with it while traveling! 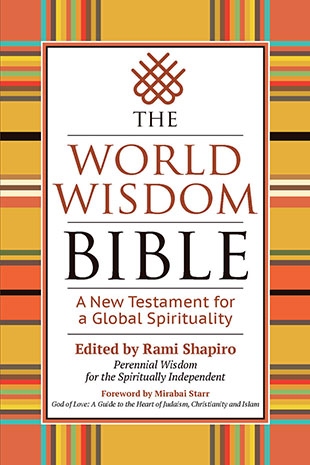