By Sasha Abramsky
A lament for the fast growth in our culture of collective anxiety disorder.

Sasha Abramsky is a widely published freelance journalist and book author. He also is a lecturer at the University of California, a regular contributor at the Nation, and a senior fellow at Demos. We were immensely impressed with his The House of Twenty Thousand Books about a man who loves books and sees them as seedbanks for new ideas and truths.

In his eighth book, Abramsky focuses on the rampant fear and anxiety afoot in the United States. As he puts it: "In our post-9/11 collective imagination our community, our country, our culture, our civilization is always a toxic envelope or a hijacked plane away from unfathomable calamity." The media are the chief feeders of fears about the safety and security of ourselves and our loved ones. The end result is that we have, as a culture, developed a serious case of collective anxiety disorder.

Abramsky points out that runaway fears often are irrational: dividing people into "us" versus "them"'; we are more terrified of ebola than the dangerous diseases of the flu or asthma, the escalation of police brutality toward people of color, or what is revealed in this shocking statistic: "In 2014, the research group Gun War News reported that nationally for every American soldier killed in Afghanistan over the previous eleven years, thirteen American kids had died as a result of being shot."

Also troubling is the California phobia specialist who has identified more than 200 phobias adapted by citizens in an effort to control their emotions. Among those listed by Abramsky: anuptaphobia, the fear of staying single, and caligynephobia, the fear of beautiful women. 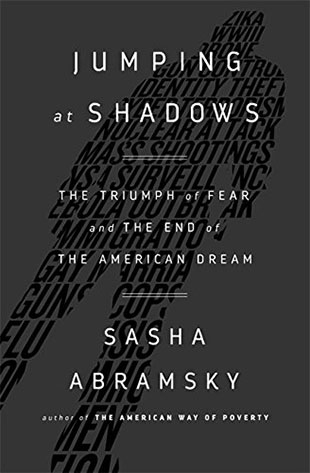