There Is a Tribe of Kids

By Lane Smith
A creatively illustrated picture book about finding your tribe.

Lane Smith was named a Carle Artist by the Eric Carle Museum in 2012 for "lifelong innovation in the field of children's picture books." In 2014 he was awarded the Lifetime Achievement Award from the Society of Illustrators. It's easy to see why he has been so honored paging through this picture book. The illustrations are inviting, many layered, colored in usual ways, and imaginative.

A little boy embarks upon a spiritual journey. Along the way he joins a colony of penguins, a smack of jellyfish, a pod of whales, an unkindness of ravens, a formation of rocks, a parade of elephants, a crash of rhinos, a turn of turtles, and other beings in the natural world. Finally, he finds a tribe of kids.

It's fun to learn what groups of animals and natural elements are called. It's also fun to imagine what a human would have to do to fit in with them. But the nicest message of this book is that everybody belongs to some community. It just may take a while to find it. 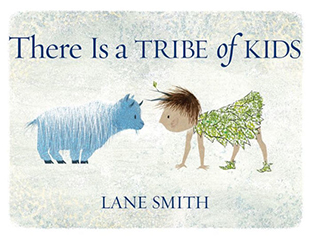