By Muhammad Yunus
A visionary work mixing activism and optimism.

Nobel Peace Prize-winner Muhammad Yunus created microcredit, the innovative banking program that has given poor people (mainly women) small loans which they can use to establish businesses to pull themselves out of poverty. In the past 30 years microcredit has benefitted 100 million families.

A World of Three Zeros is Yunus's third book, and it boldly presents a trenchant picture of capitalism is deep trouble due to its view of human beings as animated by self-interest and greed. The capitalist engine has led to rampant unemployment, environmental chaos, and widespread inequality; a 2017 Oxfam Report reveals that just eight people (Bill Gates, Warren Buffett, Jeff Bezos are three of them) own more wealth than the bottom 50 percent of the world (3.6 billion people).

The upshot of all this, according to Yunus, is that we must come up with a new economic system that sees altruism and generosity as the central powers behind the human quest for meaning. In reports from around the world, this visionary salutes the work of social businesses which he defines as "non-dividend" companies dedicated to helping others.

It would certainly be interesting to see what differences would come about if an economy emphasized selflessness rather than self-interest, where solving problems would take precedence over profit. A World of Three Zeros is a visionary work mixing activism and optimism! 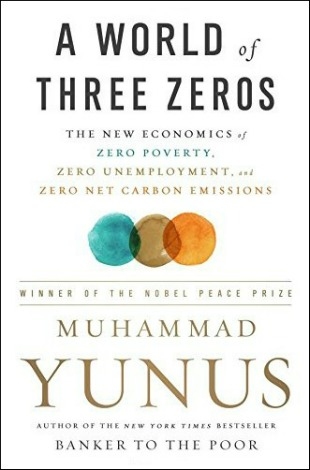