By Jon M. Sweeney
A delightful story for children of a stray cat rescued from the street by the Pope.

There are a lot of reasons to like "this Pope," as spiritual writer and editor Jon Sweeney describes the current leader of the Catholic Church. One of them is that this story seems very likely as an example of his hospitality to all beings, large and small.

A little stray cat has been living on the streets of Rome hiding behind trash cans near the gelato shop and hoping for some scraps from the fish market. Then early one morning, she is spotted by the Pope, who has escaped the thick walls of the Vatican and is enjoying a quiet solitary walk in the sunshine. "Come here, sweetness," he calls to the little kitty. Then he picks her up and takes her back to his apartment. He names her Margaret.

The Pope's home is a new experience for Margaret. After sleeping in comfort on the couch, she goes to explore other rooms and ends up at a reception for the Queen of England!

Children will enjoy imagining what it would be like to be inside the Vatican in the company of the very friendly Pope. It turns out that what is important to Margaret is also important to us: a safe place to live, plenty to eat, good medical care, and a kind companion.

The Pope's Cat is for children ages 6 and up. It is the first book in a new series about Margaret's adventures. The next one will be Margaret's Night in St. Peter's (A Christmas Story). 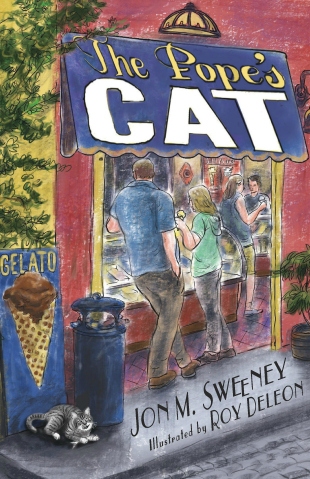