Walls A History of Civilization in Blood and Brick

By David Frye
An engrossing account of the influence of walls mixing history, military might, and impermanence.

Human history seems to favor building walls over constructing bridges. These barriers separate people from each other and often take a heavy toll in deaths as they are being built. Walls are birthed in the violence and power plays of rulers and military commanders. Those enamored of bridges have to seek out fresh ways to connect and co-create with others.

This engrossing book combines history, military matters, and archaeology. David Frye, who teaches ancient and medieval history at Eastern Connecticut State University, guides us through a wild adventure of wall building from ancient to modern times. We are treated to stories about walls in Mesopotamia, Babylon, Greece, China, Rome, Mongolia, Afghanistan, the Mississipi, Central America, and elsewhere. Beginning with a glimpse of the Syrian wall which was built 4,000 years ago, he ends with the crazy contemporary scene where the rich isolate themselves from the poor and the dangerous in walled enclaves. Meanwhile, the United States and many European countries are building border walls to keep refugees out, who are seen as the barbarians of these times.

Frye's long look at walls sees them not only as protective shells but also as enablers of civilization, art, and culture, all due to the security they offer. Of course, even the most impenetrable defense can and will eventually be destroyed by clever despots and their armies seeking to win glory for themselves. Frye has respect for the great walls of Constantinople and the austere wall of China.

Last but not least is the Berlin Wall, which when it was erected was planned to be permanent. But although it has been bashed and dashed, it remains a potent symbol in the stories of those who experienced it first-hand though "elements of international diplomacy, nuclear brinkmanship, fatal miscalculations, and brave escapes." We've long loved books on very focused topics. (We once reviewed a book on the history of meat.) We found this one absolutely fascinating. Here is history that could not be more relevant to our times! 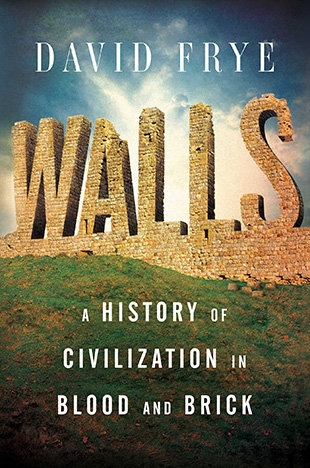