Palaces for the People How Social Infrastructure Can Help Fight Inequality, Polarization, and the Decline of Civic Life

By Eric Klinenberg
A masterwork on how places and spiritual spaces are resurrecting democracy.

"It's long been understood that social cohesion develops through repeated human interaction and joint participation in shared projects, not merely from a principled commitment to abstract values and beliefs. Alexis de Tocqueville admired the laws that formally established America's democratic order, but he argued that voluntary organizations were the real source of the nation's robust civil life. John Dewey claimed that social connection is predicated on 'the vitality and depth of close and direct intercourse an attachment.' 'Democracy must begin at home,' he famously wrote, "and its home is the neighborly community.' "

These poignant and telling words have been written by Eric Klinenberg, a professor of sociology and director of the Institute for Public Knowledge at New York University. He is also the editor of the journal Public Culture and the author of Going Solo: The Extraordinary Rise and Surprising Appeal of Living Alone, Heat Wave: A Social Autopsy of Disaster (on a 1995 disaster which killed hundreds), and Fighting for Air: The Battle to Control America's Media.

This author is currently leading a major research project on climate change and the future of cities. At NYU, he teaches courses on cities, climate change, culture and media, as well as graduate seminars on research methods, ethnography, and urban design. You can follow him on Twitter @ericklinenberg.

Most of us are familiar with the term "infrastructure" especially as related to crumbling roads, bridges, and rails. But in this watershed work, Klinenberg reveals that rebuilding and revamping "the social infrastructure" of America is the best way forward. While pundits and politicians are calling for citizens to unite on a common purpose, the author emphasizes that the future of democracy is being nourished and nurtured in shared spaces, places, and organizations such as:

These places and spiritual spaces are gathering spots where people connect, support one another, and work on projects to benefit the community. They offer opportunities for people to leave their bubbles and make new friends who are often quite different from them.

These places and spiritual spaces contribute to economic growth on a local level. They provide safety and help prevent crime. And as citizens increasingly are having to deal with the destructive effects of climate change, public spaces become refuges and sources of life-sustaining services.

Three focuses in Palaces for the People really impressed us.

First, we were blown away by the incredible variety of services provided by public libraries which novelist Zadie Smith correctly singled out as " the only thing left on the high street that doesn't want either your soul or your wallet."

Second, we agreed with the author's emphasis upon the critical roles played by shared spaces and organizations during disasters, such as when Hurricane Sandy devastated the East Coast.

Third, we found ourselves sharing Klinenberg's enthusiasm for the thousands of ways in which social structure is thriving in creative events and happenings: a place in Iceland open day and night that offers people a chance to socialize despite the freezing weather, a floating school in Bangladesh. an arts incubator in Chicago. a soccer field in Queens, flood management projects in Singapore, and a plan to transform a Chicago police station into a community center.

By giving people room to work together on solutions to some of the most insistent and intractable challenges of our time — isolation, individualism, crime, education, addiction, and political polarization — these places and spiritual spaces are resurrecting democracy by fostering bonds of neighborliness, friendship, and mutual support. These character qualities and activities trump partisan fears, hatreds, mental rigidities, prejudice, and fear of the future. Best of all, by reading about what other communities have done with public spaces, you will get ideas for what you can do in your own area.

Palaces for the people are what the "common good" looks like on the ground. 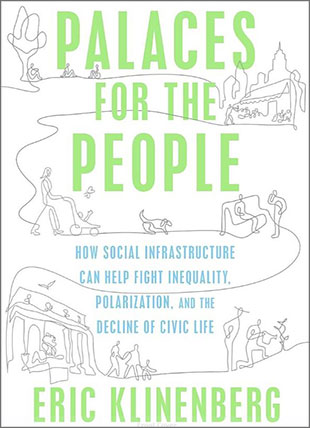